Not really the right weather for a pub survey, but here goes...

Back in 2003 was the last time I visited the Seaforth Arms Hotel, the next time I was in the area it was closed.  It was in my list of "beautiful building, pity its gone" pubs so you can imagine my surprise when I received an email a few weeks ago (Thanks Euin) telling me it has reopened.  Definitely time for a visit: Would it have been ruined by over-refurbishment?  Happily, no.  Perhaps Grade II listing has helped its survival.

Inside the impressive building a rather fine historic interior remains, including some excellent ceramics.  Only one small room in use, four regulars plus me.  The classic layout of a bar in the corner plus a corridor with lounge rooms behind served from the back of the servery is apparent, but most of the lounge areas on the other side of the corridor have been boarded off, and one of the hatches in the bar back has been boarded up.

Commercial radio and animated banter were the soundtrack.

I felt a bit exposed, perched on a stool at the side of the tiny bar room, and entered my notes on the tablet quickly and then put it away.  As usual, no-one took any notice of me and I needn't have worried.

Work up ladders was going on outside, perhaps a new pub sign is coming?  The current one looks blank.

On to the self-styled "world famous" Caradoc: 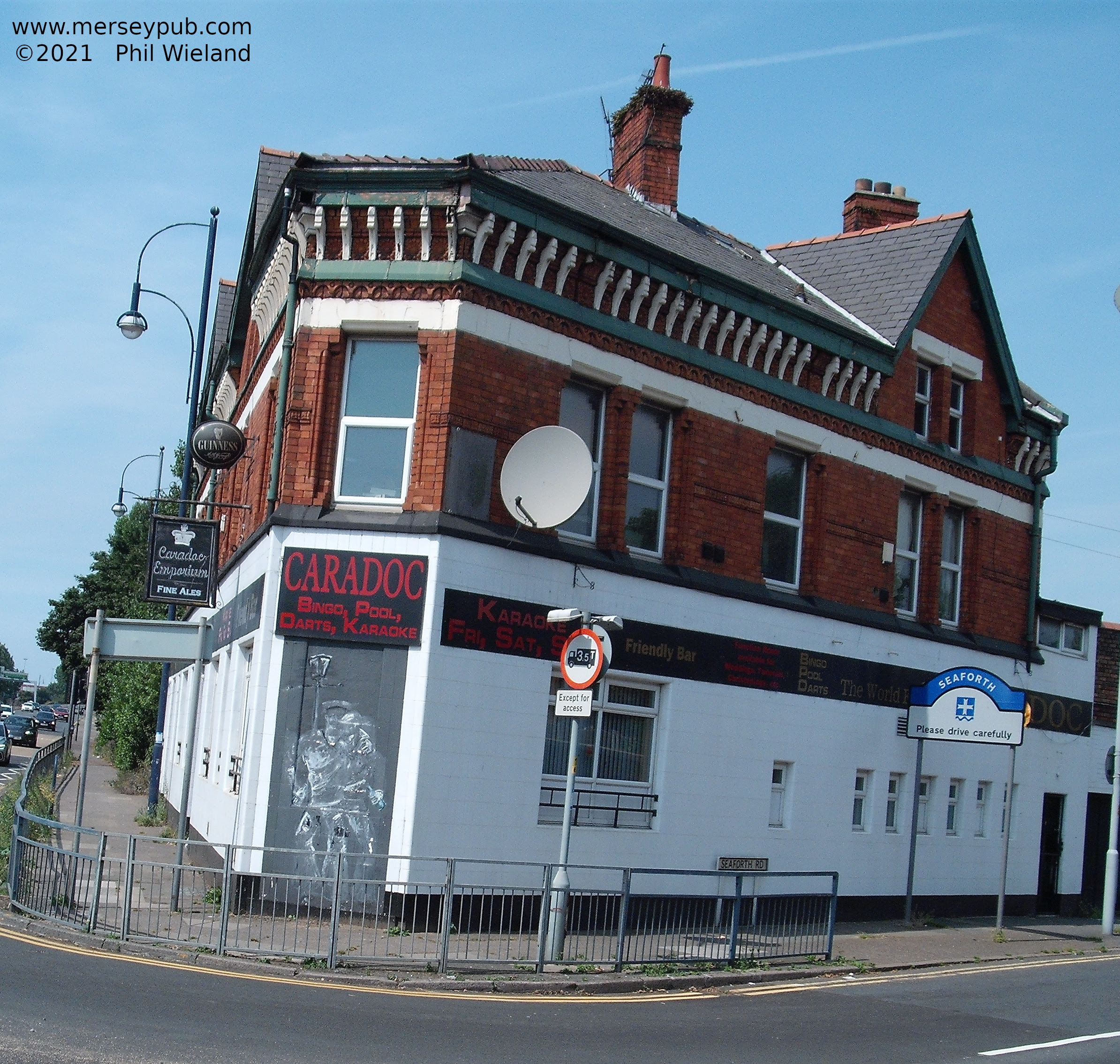 This place seemed exactly the same as it was in 2018 and I sat in a large well cared for room with pleasant plain decor, with a counter on a raised area along one side of the room.

Only three regulars plus me formed the custom I could see, but I could hear the clack of pool balls from the other room, which doesn't have a counter.

The only other sounds were quiet racing commentary from a TV at the far end of the room, and the locals' conversations.  One of them was called Phil, causing me to look up a few times when his name was called.

It was very hot in here and I looked forward to some cooler air on departure, but on stepping out of the door into the sunshine I found it felt hotter outside.  Phew!

Next, a geographical quandary; just 100 yards from the Caradoc is the Gateway Hotel, but I have it in Bootle.  One has to draw the line somewhere, but I'm not sure I've got this border right, so I have now amended the database to place this one in Seaforth: Location notwithstanding, another one that's made it through lockdown apparently unscathed, and the great fun slightly quirky interior remains, well looked after.

The other side looked out of use, perhaps it is now a function room.

About five other customers, three generations of the same family I think, kept gentle chatter going in the background while I enjoyed another pint of Carling.

It seemed cooler in here than the last place, open doors at both ends of the room allowing a gentle breeze to freshen the air.  And also allowing the intermittent roar of Dock Road traffic in.

At this point I'm afraid I decided that the heat of the day (Speke airport were reporting 30C) was just too much, so I abandoned the plan for a long walk towards Bootle, and retraced my steps to Seaforth for a train home.