Regular readers of this blog (In the unlikely event that there are any.) will be thinking "Why Waterloo, he was only there last year?" and they'd be right, but I had an appointment nothing to do with pubs, so while I'm here it would be rude not to tick some pubs.  In any case, if all goes to plan I should be able to avoid the ones I visited in 2020.

I started at the Liver: 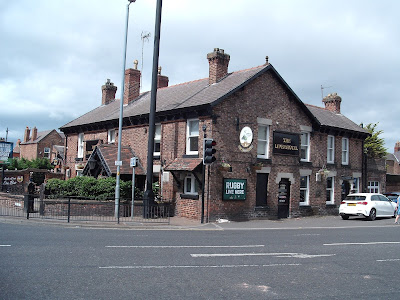 A moment's concern when they weren't open at 12:03, but a minute later the door was open and I wasn't even the first one in.

I was promptly and efficiently signed in and served, and moments later I was enjoying a pint of Yardbird from Greene King.  First out of the pump on a hot day is always a little risky but this was spot on, and at cellar temperature.  And with a 10% CAMRA discount - As always I forgot about this, but the barman offered.

I idly wondered about having some lunch.  Do they do food?  I looked around but couldn't see any menus etc. so perhaps not.  Internet says they do.  I guess the current regulations mean you can't put menus out on the tables.

I say this every time I come here, there's something special about the Liver that I can't put my finger on, but whatever it is I love it.

There were very few customers at twelve on a Wednesday, I hope they are busier later.

On to the other end of the main street, and the Marine: 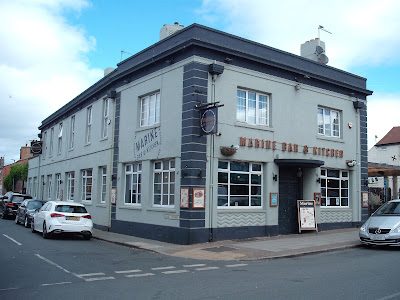 Last time I was here this had been renamed as Champs, and was a rather good but totally deserted sports bar, if I remember correctly.  Now it has reverted to its former name and the sporty theme has gone, leaving a well done food-oriented place which was doing a decent trade at one o'clock  although there was plenty of room for more customers.

The two handpumps at the end of the counter were in use, sadly as kitchen roll holders, so I had a nice cold pint of Guinness.

No doubt about food here, I was offered a menu as soon as I sat down.  The selection of pub standards looks good.

They've got building work going on, mainly outside I think, so there was a steady flow of electricians carrying drums of cable and ducting through the pub.  They were extending the cover on the garden and adding an outdoor giant screen, I think. 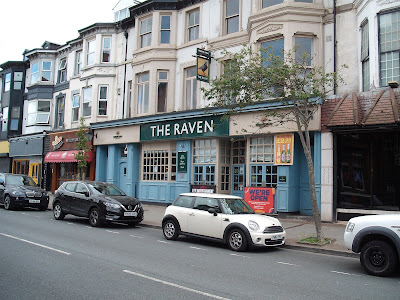 More of a down market boozer, this one, but none the worse for that.  A few blokes in, some playing pool, and the music was a bit on the loud side.

One efficient barmaid was providing table service, the card machine was broken so I paid with real money, the first time I've done that in a pub for ages.

Was that an Aussie White I saw being poured?  I wasn't sure it still existed!  I didn't see who was drinking it - not really a blokey drink is it - so I imagined a granny sitting out of my sight round the corner, but I never saw her.

Two policemen came in just as the barmaid disappeared out the back.  When she came back they discussed some crime prevention scheme and exchanged contact details.

Now, on to the Alexandra: 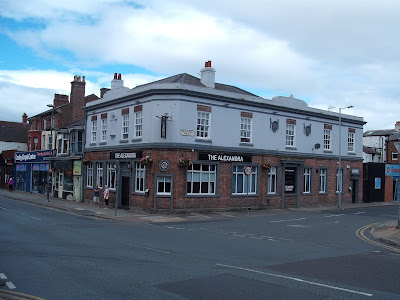 Another down market boozer in terms of clientele, perhaps, but beautifully decorated and maintained.  No cask, of course, so another Carling for me.  Quite a lot of people in, for the first time today the main sound was animated chatter, generally drowning out the music.

The barmaid was on the ball, as seems to be the norm nowadays, and almost instantly I had my lager.

Definitely the busiest pub I've visited today, and it's still only two o'clock.  Silent football on most of the tellies, but royal Ascot in front of me.

Now this is how table service restrictions should be handled:  The regulars stand up and approach the counter, but not close, place their order and then the barmaid delivers the drinks to the table.

I discussed surviving the pandemic with one of the regulars, and then it was time for the train home.

Pub of the day: The Liver.
Miles walked: Hardly any.
Maybe coming soon: Undecided.
Posted by Phil Wieland at 23:28