Time for one last crawl before I get locked down again.  How about a few favourites in town?

Before anyone gets upset or offended, this is not a list of my top five pubs in Liverpool, it's just a few of my favourites.

I started at the Bridewell: An efficient friendly barman soon had my order and allocated me a seat in one of the cells.  Moments later the landlord bought me my pint of Kirkstall Pale, I think it was.  He stopped for a brief chat about the current daft situation.

Plenty of chatter which was louder than the background music, mostly conversations about lockdown, of course.

Next, towards the waterfront and the Baltic Fleet.  Curses!  It's not open.

On to the wonderful Lion: This architectural gem never fails to please, and although they had less ales on than usual, my pint of JHB, quickly brought to my table, was delicious.

Only one other customer in the bar side and, I think, just one in the lounges, I had thought there might be a bit of a pre-lockdown rush, but apparently not yet.  I bet this evening is busier than usual.

The regular in the lounge departed, "Have a good Christmas" said the landlord.  Cynical?  Sadly, he might be right.

I enjoyed most of my ale in total silence, until the music suddenly started up, at very low volume.

Two more customers came in to double the trade.

Next door is the Railway: Not as historic inside as the Lion but still a rather fine traditional interior, although I think all the etched glasswork is modern.

They seemed to be winding down for lockdown, the barman informed me they were out of Guinness and the last of the Doom Bar had just been poured.  They still had Black Sheep and Tribute and the latter was spot on.

More people in than next door, with animated conversations mixing with the background music, but still no sign of a final rush.

The "Welcome back we've missed you" sign seems a bit ironic today, let's hope they get to use it again soon this year.

Where next?  How about the Excelsior: 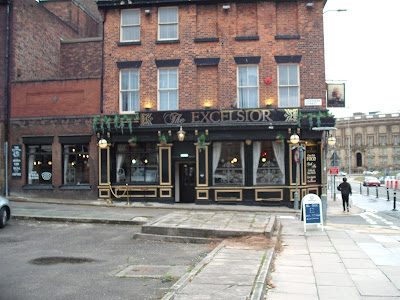 All cask ales £2 until it's gone said the sign and I was soon served with a spot on pint of Shropshire Gold.

Only two other customers in here, and I got the impression one might actually be staff.  Certainly no sign of the end of term rush that I had been expecting, I guess Merseysiders are resigned to their fate and don't see any reason to party.  I can see their point.

For some years I've always felt this pub deserves to do better than it seems to achieve.  It was a regular haunt of my Wednesday night friends for some time, but we eventually moved elsewhere, probably more due to the desire for a change than a problem with the Excelsior.  In fact, given a few more weeks of opening I think we would have come back here, but that's obviously not going to happen in the immediate future.

Time for a "final" pint, perhaps just up the road in the Ship and Mitre: I worried:  What if my "last" pint is 'orrible?  Or I can't get in?  Back in March I really regretted that my last two drinks were Guinness in keg pubs, I don't want to make that mistake this time.

No need for concern!  At just after three it was the quietest I've ever seen in here, with just a scattering of customers about the place.  The beer I chose had run out but my second choice, Marstons Saddle Tank, was in fine nick.  It's not looking good for this evening, with only two real ales left, and a number of keg taps out of action too.

As always, no music just chatter in here, and it's a bit more echoey than we're used to with so few people in.

There was some pulling through going on behind the bar, were they adding another cask ale or just cleaning the pipes ready for lockdown?  The latter, I think, confirmed when some more lines were also flushed through.

A great pint in a favourite pub to end this drinking season, one can only wonder how long it will be before I get to drink in a pub again...

How about that!  Five excellent pints in five excellent pubs, what more could anyone ask, but there was one more bit of excitement before I got home:  They're filming something at St George's Hall, and I walked past a number of Gotham City police cars and buses. 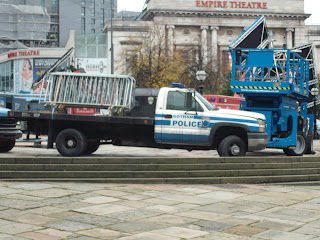 There was quite a crowd of onlookers so I'm guessing there were some stars involved, I look forward to watching the film when it's on free TV in a few years time.  The whinger in me wants to know why my pubs have to close but overpaid celebrities can still bring umpteen staff in to make a movie.  A quick search of the internet revealed that they're filming "The Batman", particularly amusing since the auto spelling on my tablet insists on changing barman to batman every time I type it!

To end on a positive note, the table service today has again been exemplary, with every pub providing prompt service and a polite enquiry as to whether I'd like another as I approached the end of the pint.  This is the one thing I'd like to retain long term from the current mess.

P.S. The new rules don't seem to add any travel restrictions, maybe I should move to somewhere where the pubs are still open?

Have a good Christmas!