It's All About That Bass

On a wet Friday afternoon I headed into the city centre to mop up a few of the many bars that are overdue for a visit.  Sadly that makes today the exact opposite of a real ale pub crawl.  I started on Charlotte Street, literally next door to Wetherspoon's, in Ruby Blues: 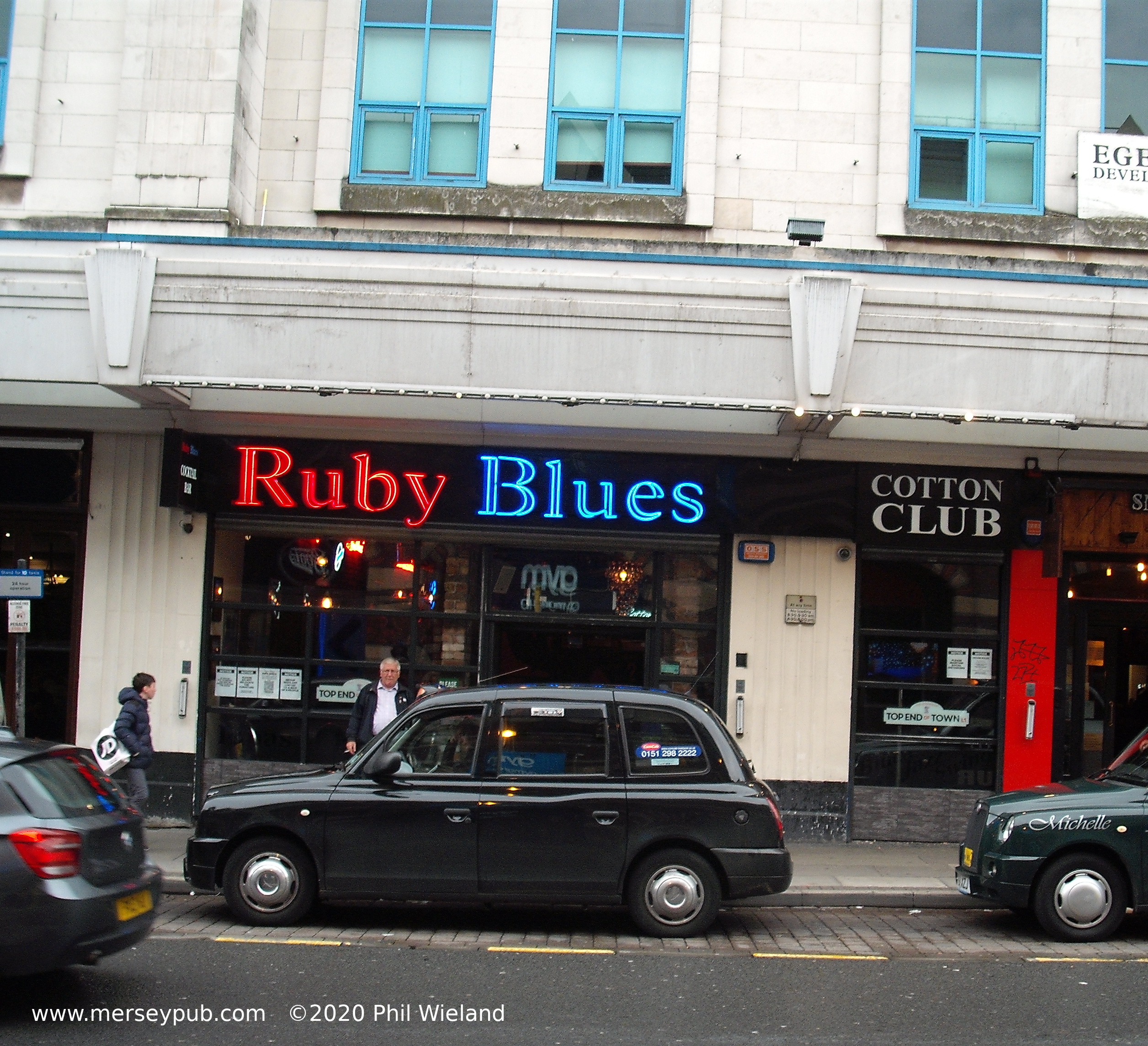 I must apologise for the quality of the pictures in today's report, the traffic on Great Charlotte Street and a full taxi rank made things very difficult.

Anyway, it was good to start with a new tick, this used to be an NHS drop-in centre until it became Ruby Blues in 2015 so I'm only five years late.  A large room with a small stage in one corner.  Very good decoration mainly on a music theme, and I particularly like the chandeliers made out of wine glasses.  Hardly any customers at two on a Friday, but more came in while I was here.

No real ales, of course (I suspect the neon sign above the counter "It's all about that bass" doesn't refer to my kind of Bass.) so I had my usual lager.

A group of four youngsters sat at a table.  Their drinks orders included all sorts of shots and cocktails which the barman prepared with aplomb.  They seemed to get two of everything, for some reason.

Live music from 17:30 today, I bet it gets busy later.  Not really my sort of place, but admirably done and deserving of success.  Perhaps I'm biased because it's a new tick!

Just next door is Smokies: 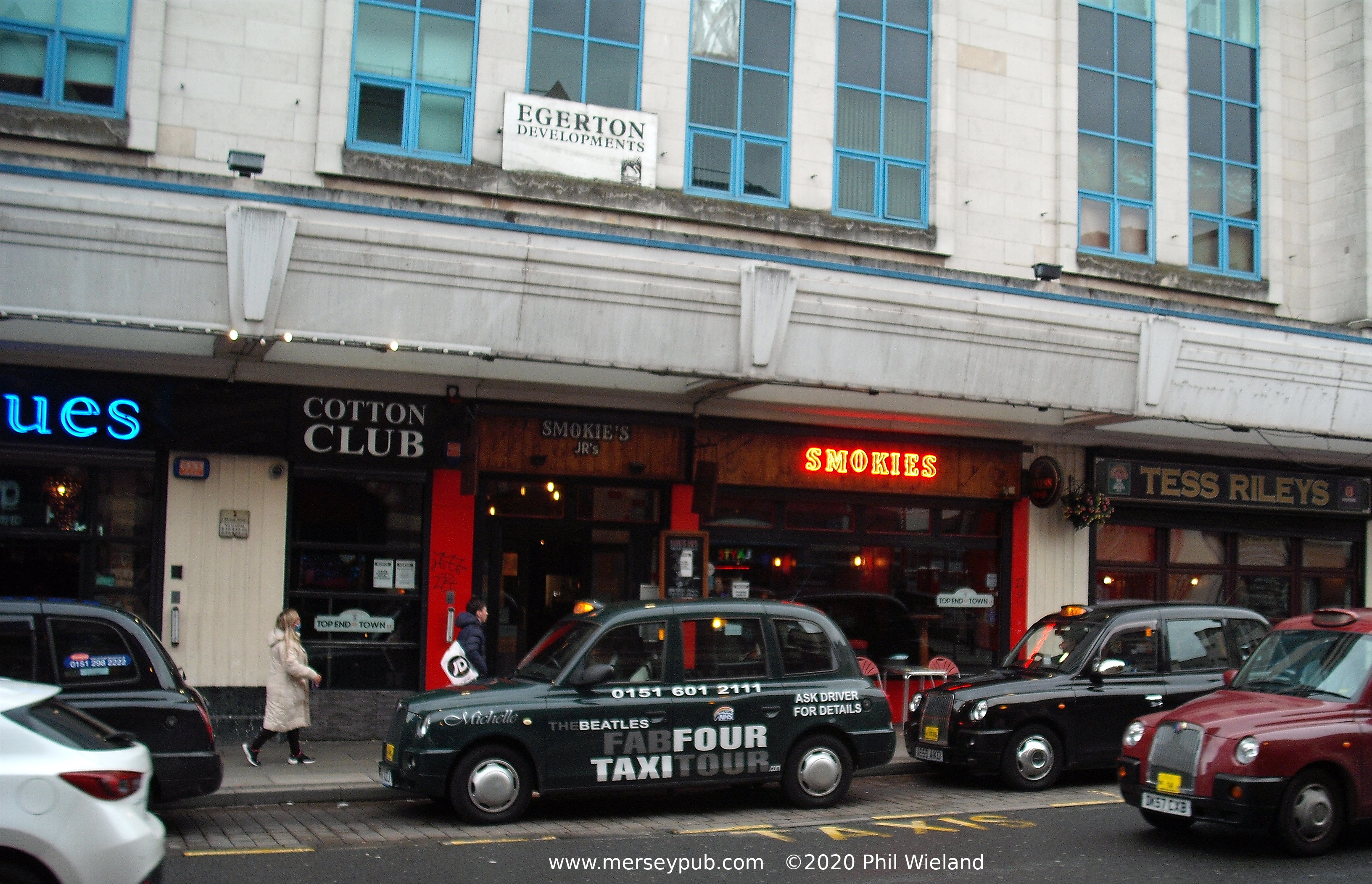 Last time I came in here it was called J.R's, the name has changed but it remains pretty much the same, a pleasant well done room with a tiny stage in the corner.  My notes from 2014 described the singer as "deafening", I suspect it'll be the same later, but at two on a Friday it was fairly peaceful, the background music about 50/50 with animated chatter.

When the barmaid asked "Have you got a card" I wasn't sure if she was referring to a loyalty card or a credit card.  I said no and paid by cash - Reading the signs after I sat down, they have a loyalty card scheme.

For some reason there were a lot more people in here than next door, mainly old blokes (By which I mean older than me!)

More of an American theme in the decor, with Route 66 signs and a half size motorbike above the counter.

Next, once again just one door along the road, is Tess Riley's, not visited since 2013: 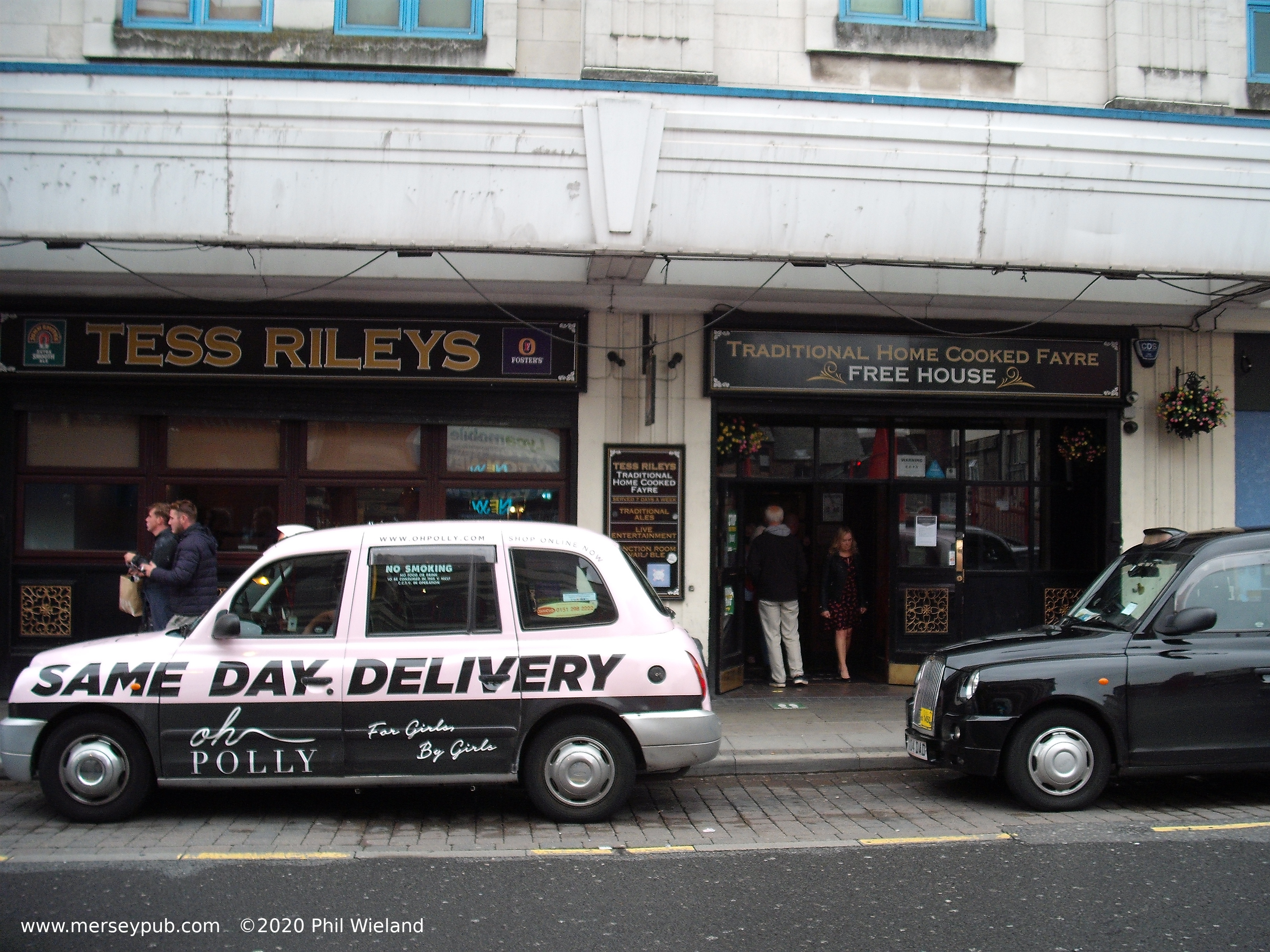 This place has an older feel about its atmosphere, the decor is 1950s traditional style although clearly all a lot more recent than that.

Well filled with cheerful people, my age or older, but I managed to find a table at which to write this and enjoy my Guinness.

The quiet music was mostly drowned by happy chatter, but I could make out Yellow Brick Road amongst other favourites.

Aside:  I got a replacement for my late lamented tablet a few days ago, and this was the first pub survey with my new Galaxy Tab A.  It seems to work very well...

It was only as I was half way down my pint of Guinness that it occurred to me that this place is an example of that increasingly rare phenomenon, the "traditional boozer".  Couples and groups of friends, all my age or older, out for a pleasant afternoon of chat and drink.  When I started surveying pubs twenty-something years ago, there were umpteen places like this all over Merseyside.  All filled with lots of people and a smoky haze.

A gang of about eight younger women came in, some dragging suitcases, lowering the average age significantly.  I wondered why they chose this place.  None of my business, of course, as long as they're enjoying themselves, and they seemed to be.  Given my comments above about this place, it is very good to see some younger customers as well.

Again, just one door further along is the Rocking Horse in the former TSB bank, which has been "Coming soon" for some time: 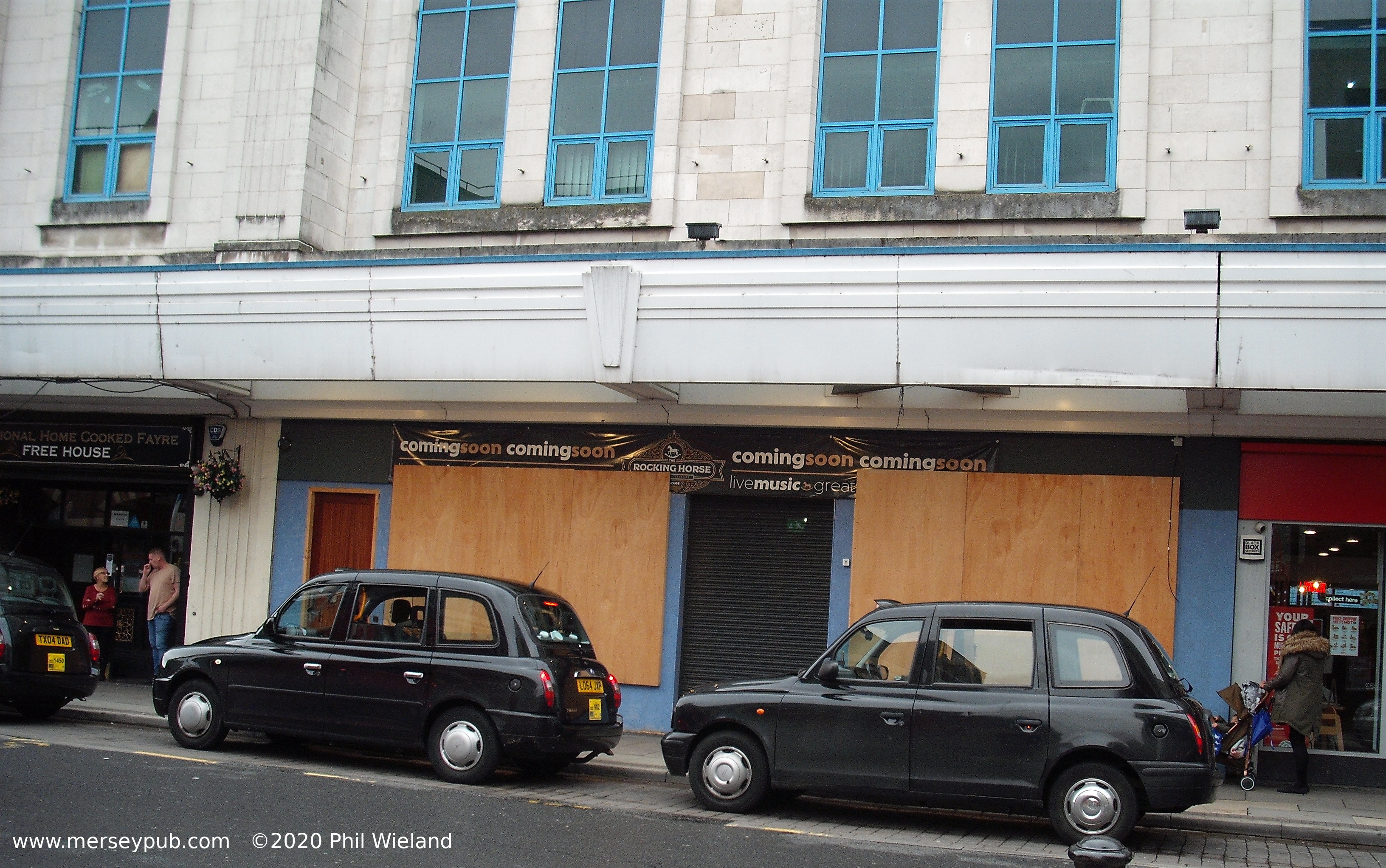 Five places next door to each other, I'm not getting my exercise on this survey!  So now, a bit of a stroll.  Is it a new tick? I'm not sure; located in the building that formerly held the famous Cabin Club is a new bar called Jimmy's: 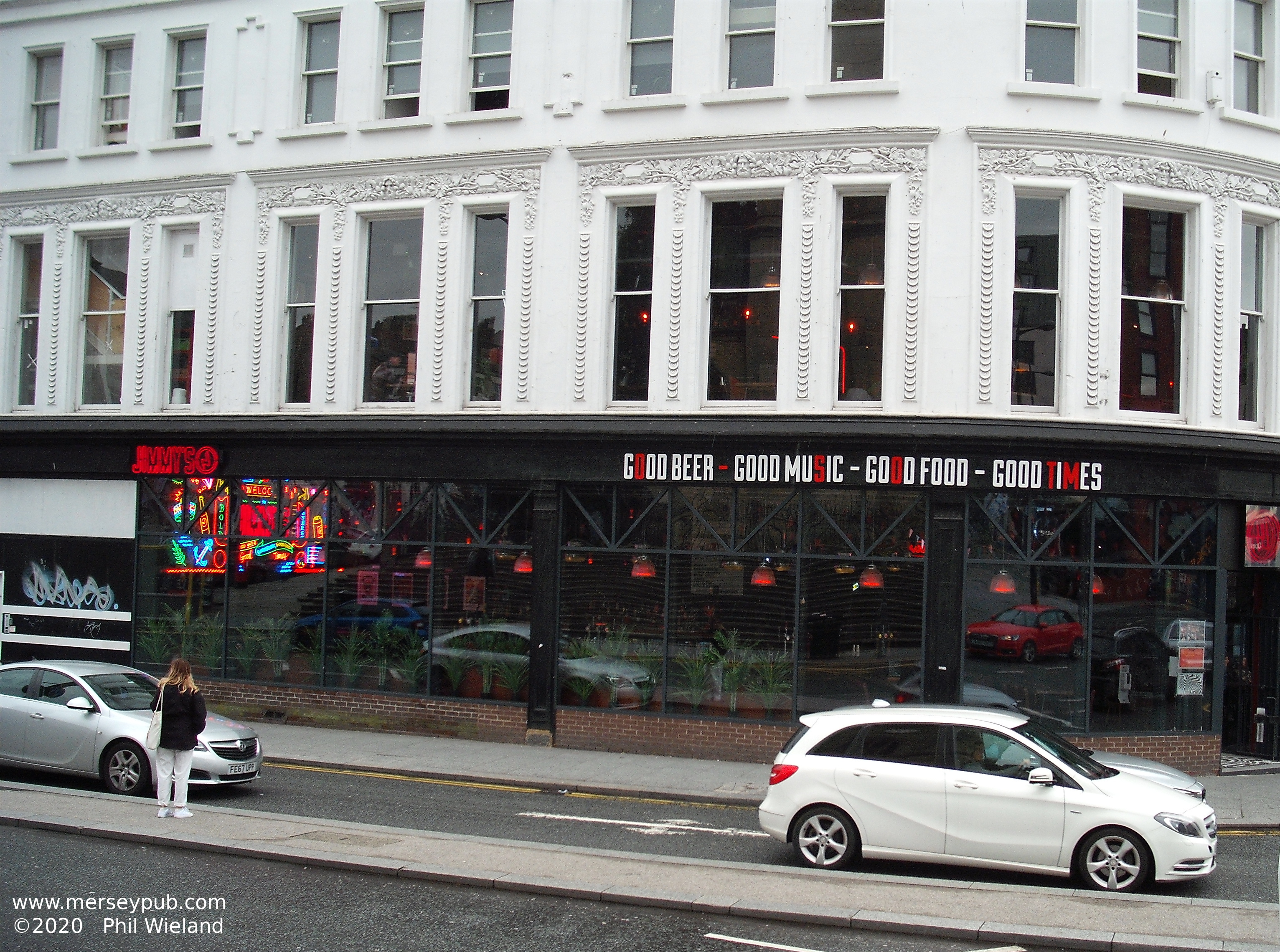 I wonder if the odd red letters in the sign mean anything? O-SOTM.

No real ale here, and nothing "ordinary", so on the barman's advice I had some Lagunitas Daytime IPA which was the best beer of the day so far by a wide margin.  Very hoppy, delicious.

Not many customers at half past three but I imagine it's very popular later.  Modern decor, bare cable trays above, and a wonderful wall of fifty lava lamps as the bar back.  As an engineer I tend to disparage "designers" but whoever came up with that deserves an award.

I remember the first time I saw a lava lamp back in the late sixties, I was fascinated.  And here I've got fifty to look at, all different colours.

The menu here, burger, fried chicken and kimchi, and so on looks good, but it ain't cheap.  Neither was the beer.

A bloke came in and ordered a pint after a chat with the barman.  He sat next to me and we chatted; he had been a regular in the Cabin and wanted to know if I remembered it.  He advised me that the upstairs restaurant here has a good view out over the street, he wasn't sure if it was still operational due to Covid.

It's twenty-two years since I was in the Cabin Club.  It wasn't really my sort of night out but it was a shame to see such a Liverpool institution close.

Where next?  How about one of Liverpool's architectural gems, the Vines:

What a wonderful place, as good as or possibly even better than the more famous Philharmonic.  Sadly, no real ale, so I had to revert to Guinness.

I adjourned to the side room with its wonderful plasterwork and beaten copper fire surround, oddly the rest of the pub seems busy but this room is deserted.  Perhaps I walked past a no entry sign?

Gentle music and louder chatter formed the soundtrack as I sat back and admired the architecture.

As a real ale fan, I would quite like Nicholson's to take over this place but that's not really necessary, it's great as it is.  It has had a slightly dodgy reputation in the last few years with the owners rumoured to be closing it, but clearly this wasn't true, and it continues to be wonderful inside and out.

Five is enough, it was time to don my coat and get the train home.  Coat??? Isn't it supposed to be Summer?

Pubs of the day: Vines for historic interior, Jimmy's for tasty beer.