Yesterday was nice and sunny so I headed out for a research trip, to Waterloo. I emerged from the station to see the sad sight of the Alexandra closed and tinned up. I wandered down to the Volunteer Canteen, but unfortunately it was shut. Outside the Old Bank the sign promised local cask ales and indeed they had three from Liverpool One on tap. I enjoyed a pint of Kings Regiment. This pub has hardly changed since I visited in 1999, and once again I was the youngest customer. The walls are cluttered with music and football posters and memorabilia giving the place a slightly untidy appearance at first glance, but actually it is spotlessly clean, well maintained and comfortable.

My next call was at the fairly new Stamps Too where I found a long narrow one-roomed pub which manages to squeeze a stage for live music along one side. Six handpumps on the bar offering various unusual beers, I had a pint of the excellent Allgates' Citra.

At the top of South Road sits the splendid old building that is the Liver Hotel, another pub I haven't visited since '99. The interior is very pleasant. Real ales on offer were Tetley, Cains, and Black Sheep, and I chose the Tetley, a long term favourite of mine.

Next, round the corner to the Ferndale Lodge. A total contrast this one: Plain, down market and slightly scruffy; and no chance of real ale. Back in the late 90s there was a chain of pubs like this around Liverpool called Oak Lodges, all looking exactly the same. Some of them remain but there is no longer any sign of chain branding, so I don't know if they are still connected.

My final stop was in the Lion and Unicorn. Once again, little change in the ten or so years since I was last here: A large, open, pleasant enough one room boozer where I was a little surprised to find a choice of Greene King's IPA and Old Speckled Hen on hand pump. I chose the IPA for a change.

P.S. Did you know it was Sir Arthur Conan Doyle who first used the phrase "To meet our Waterloo" in The Return of Sherlock Holmes in 1909?
Posted by Phil Wieland at 11:05 No comments: 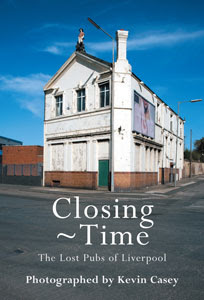 Closing Time is the title of an excellent book of photographs of closed Liverpool pubs taken by Kevin Casey. The wonderful shots of architectural gems and plain sheds in various states of decay certainly brought back some memories for me, and I recommend you take a look.

Of the eighty pubs featured, I have drunk in sixty-five, a figure I feel few could match!
Posted by Phil Wieland at 21:59 No comments:

Beer Of The Year?

Perhaps it is a bit early in the year to be announcing a winner, but I was in the Dispensary yesterday where I had a pint of the superb Plum Porter from the Titanic Brewery. I know fruit beers are not to everyone's taste but I am fond of them, and this is one of the all time greats. Titanic's normal Porter is an excellent beer in its own right, and the addition of plums makes it truly wonderful.

I strongly recommend you seek this one out and give it a try. I guess it's a seasonal brew but Titanic's web site seems not to have been updated since last summer, so I'm not sure. Maybe it's a one-off - I hope not.
Posted by Phil Wieland at 17:18 No comments:

I visited the recently opened All Bar One on Derby Square today. This used to be the Goose at the Queens which was a pleasant place serving excellent real ale, now it's part of the All Bar One chain. More of a restaurant than a pub, they nevertheless served me a decent pint of Thwaites Original at the bar and I sat at a table in the almost empty ground floor. The decor is pleasant enough and like the menu is somewhat up market. They also serve breakfasts, I quite fancy going in for eggs Benedict some time. I didn't explore the upstairs part.
Posted by Phil Wieland at 17:11 No comments: