Four trains, ending with possibly my last ride on a class 142 railbus, carried me to Rainford Junction where just outside the station is my first target for today, the Junction:

I walked in past the "bookings only" sign, no one complained.  I had to sign in, the previous customer was Fred West!

The friendly barmaid/landlady ignored the heckling from the bar flies and soon poured me a fine pint of Wainwright.

Just before two on a Friday the place was ticking over gently, mostly with diners I think.  Always a good pub, this, nicely decorated and serving what looks like quality food along with decent real ale.

I studied the rules displayed on every table.  Bookings only for food and drinks, it says.  I don't really see the point of displaying that sort of thing if you're not going to actually do it.  Presumably if I turned up when it was busy they might turn me away?

I have been worried since lockdown about travelling a long way to a pub and then not being allowed in, so far it hasn't happened, but I've got a long walk coming up so let's see...

My printed map wasn't very clear so I fired up Google's, and once I'd told it I was walking it came up with a shorter route which turned out to be a splendid stroll along the former railway embankment, now Rainford Linear Park, under threatening skies.  I felt a couple of drops of rain but it didn't get any worse.

Next was the Eagle and Child:

The barman apologetically asked me to fill in an ID form, while he threw two pints of Pedigree down the drain before pulling me one.

It was only some time after I had sat down that I noticed the "please wait here to be seated" sign which I had walked straight past.

Not much has changed since I was last here, in 2003, and it remains a friendly two sided pub serving quality ale.  Quite a few locals were in, meaning the chatter was slightly louder than the muzac.

Next, just down the road was the Golden Lion, which my records and whatpub seemed to think was closed, but it wasn't:

More of a restaurant than a boozer but nonetheless once I had signed in I was allowed to order a pint of Wainwright which was delivered to my table and was spot on.

I paused to send an update to whatpub, before continuing my review:  The decor here is very well done contemporary, almost Ember Inns but not quite as stylish.  Does that sound like a criticism?  It's very good actually.

At half three on a Friday, only a few other customers, all diners, were in, not much to keep the two bar staff (presumably plus someone in the kitchen) occupied.

I looked at the picture on the wall beside my seat, a framed OS map; but it's centred on Garswood and doesn't show Rainford, what's the point?  Aha, the next picture along is the adjacent extract, which includes this pub.

A little further down is the Derby Arms:

Very quiet in this pleasant traditionally decorated multi area pub, only two other customers I think, and they left shortly after I arrived.

The pleasant barmaid took my details and then pulled me a pint of Mad Goose.  It seemed just a little bit tired but definitely drinkable.

No one else came in, apart from one person making a booking, while I swigged my ale.

Next, the Star Inn: 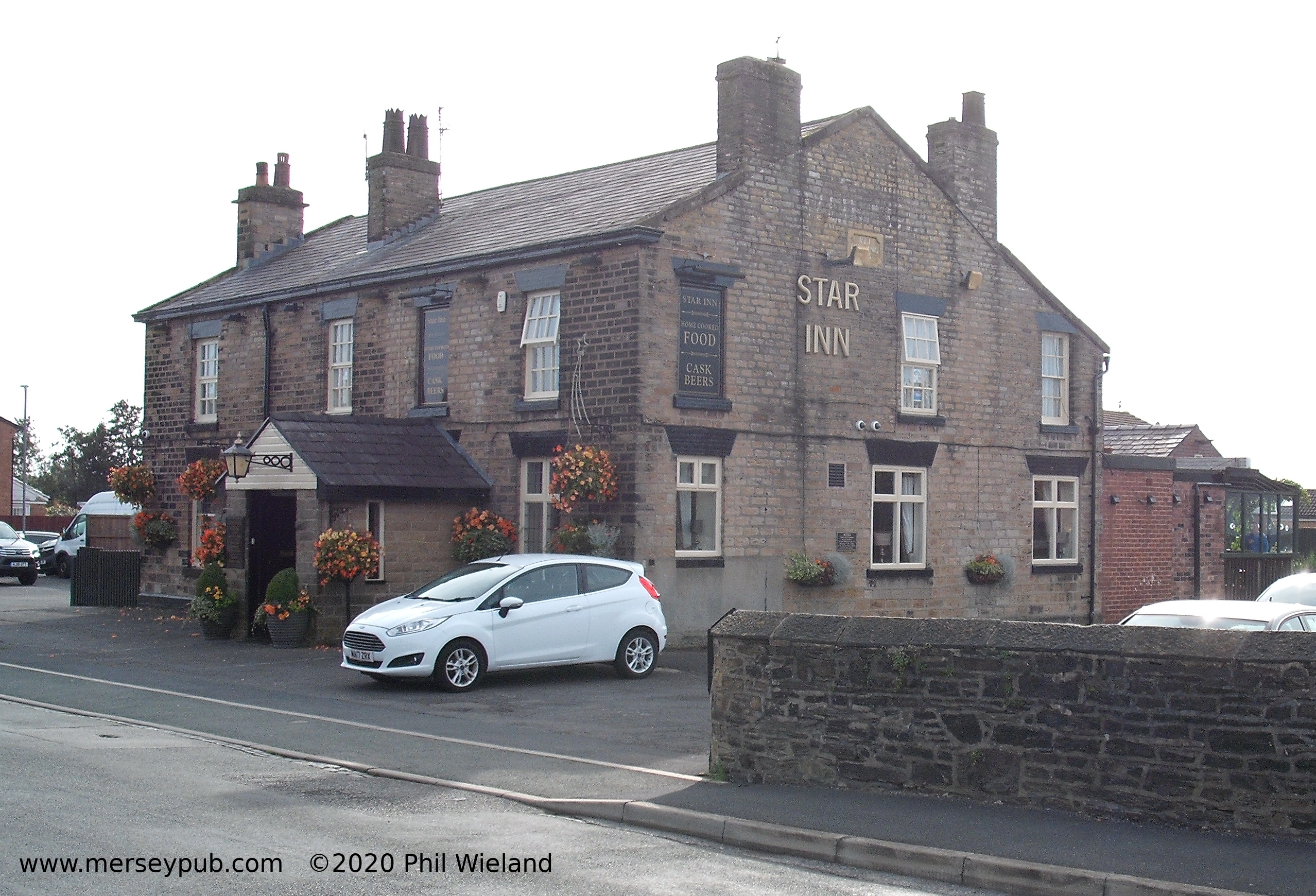 A great pub this, with a selection of real ales on offer, I had Morehouse's Blonde Witch which was spot on.  No one asked for any contact details this time.  The serving counter was walled in with perspex which I must say I find very off-putting, but I suppose many think it's necessary nowadays.

A dozen or so locals were keeping the place ticking over but most of the tables were empty, let's hope it's busier later.  As I enjoyed my pint, more and more people came in, and the quiet music was soon drowned out by cheerful chatter.  Nice pub!

Now I had a difficult decision to make:  There's one more tick near here, the never visited Bottle and Glass but I've already done five, it's a long walk and I might not get in.  I've already had five pints, can I cope with another?  Also, the bus service to St Helens thins out shortly after six and I don't want to get stranded.  My decision was it's time to head for home, and the Bottle and Glass will have to wait.  If the Golden Lion had been closed as expected...

Pub of the day: A difficult choice today, but I think the Star wins.