My objective for today was to update my records and score some ticks along the touristy hell that is Mathew Street.  Alternative plans for Birkdale were abandoned due to the weather forecast, some doubt about what would be open, and problems with the train service.

Failing to keep to the plan of doing overdue re-visits and brand new ticks, I succumbed to temptation and started in the wonderful White Star: 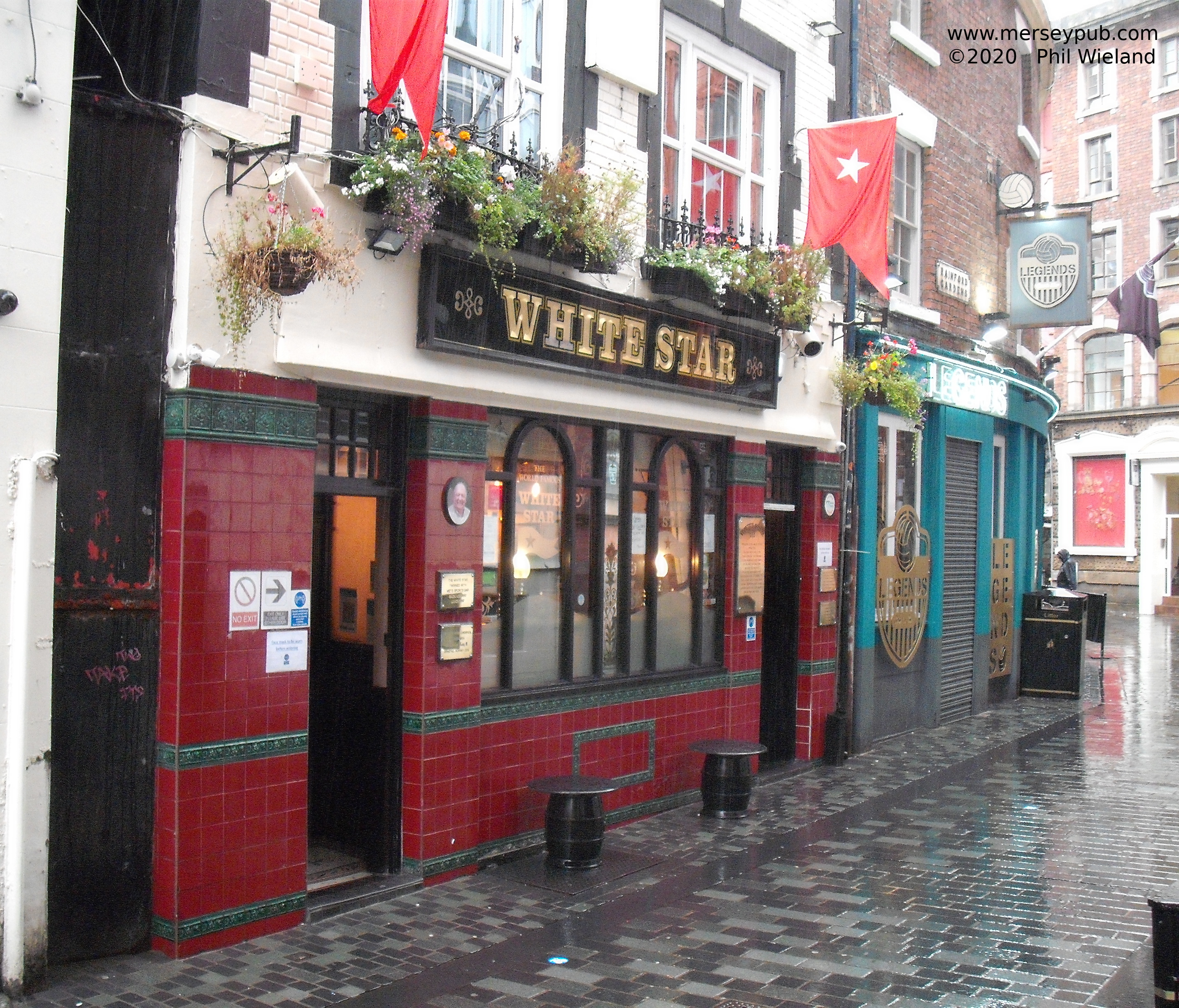 Only a few customers in, chatting to the efficient landlady in the front room.  I was banished to the rear on my own.  My pint of the only real ale on, from Otter, arrived at my table almost before I had taken off my mask and coat.  And it was spot on.

This pub has long been a favourite of mine: Back when I first lived in Liverpool (Good grief, is it twenty three years?) a Saturday shopping trip usually began with a pint in here.

I don't often come into town on a Saturday nowadays, but I'm fairly sure it would normally be busier than this.  The landlady chatted to a regular, she's going to try the new rules for a week and see how it goes, it may not be worth opening.

Next, I wandered the length of the famous street making notes and getting wet, before heading into the Cavern Pub.  I'm afraid the heavy rain meant some photographs are missing.

Here I had to fill in a form despite signing in using the NHS app.  Isn't that against the rules?  I also had my temperature taken, a first for me.

There were a about a dozen customers in the basement room the walls of which are packed with music memorabilia.  The loudest sound in here was the two bouncers chatting at the top of the stairs.  The background music was good stuff, naturally with a Beatles bias.

The tourists chatted quietly and enjoyed their drinks, as I did mine.  The two handpumps were shiny but clipless so I had cooking lager, of Australian branding here.  My order was taken quickly and delivered promptly.

Considering this place is mainly a tourist trap I must say it is well done.  There's a small stage for live music.

Across the road the Cavern Club wasn't open, but next door to it was Sgt Peppers.

It's always pleasing to get a brand new tick.  The barmaid/waitress offered me a QR code that didn't work in the NHS app but then found the right one.  She took my temperature and quickly fetched me a pint of Canadian fizz which cost £4.50.

This bar has one largeish room with a big stage at one end and a counter along one side.  Like the previous place it is obviously aimed at tourists, but well done.  The decor is modern, with (fake?) bare brickwork walls, exposed air conditioning ducts and retro light bulbs.  Plenty of Beatle stuff on the walls, including a walrus' head, fake I hope.  The yellow Submarine style mosaic behind the bar is particularly good.

Only a handful of customers were in here, I suspect they need to be busier than this to make money.

As I approached the end of my pint someone was setting up equipment on the stage, so I guess there's live music soon.

I could hear the rumbling of the Wirral Line trains below, many people will tell you these were the reason for the destruction of the original Cavern Club, but there's a bit more to it than that.

I wanted to tick the never visited King John next, but it wasn't open yet, so next door and part of the same complex is Rubber Soul, not visited since 1998: 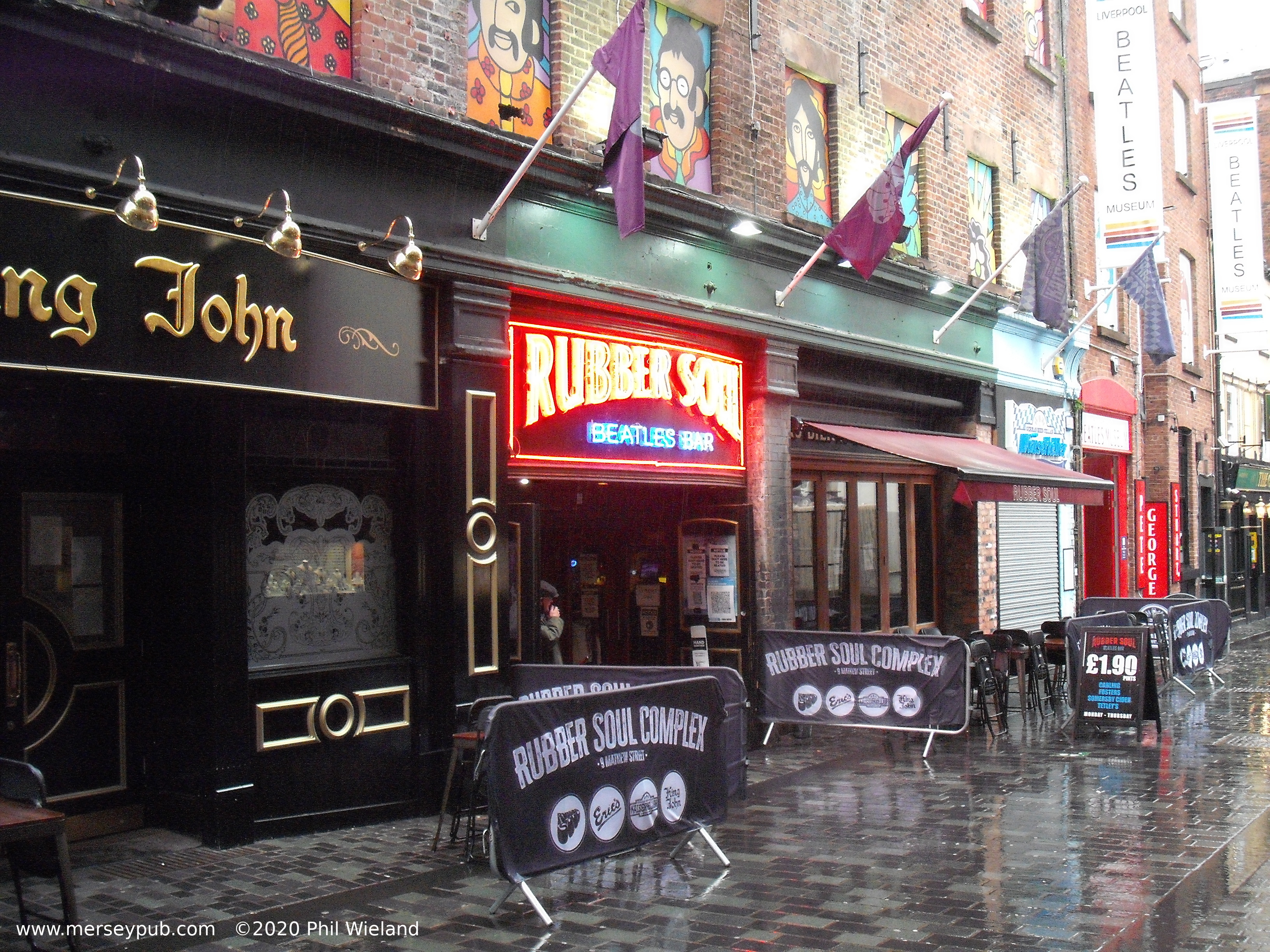 A quick sign in using the NHS app and once again service was prompt and efficient.  Did she say £2.50 for a pint of Carling?  A bit cheaper than Sgt Peppers then!

This was the busiest place so far, with quite a lot of people scattered around the rather dark atmospheric room.  Back in '98 I described this as a disco but that was on a Friday night and a long time ago.  I am wondering if the King John was then part of the same place?

Lots of different footie matches on the tellies defined the atmosphere here, the customers almost all older blokes.  The quiet background muzac mixed with animated chatter at various tables.  Surely they can't all be households?

Contrary to my predictions, the rain was getting heavier, storm Alex apparently.

Next door, in fact part of the "Rubber Soul complex", King John was now open, so I went for the brand new tick: 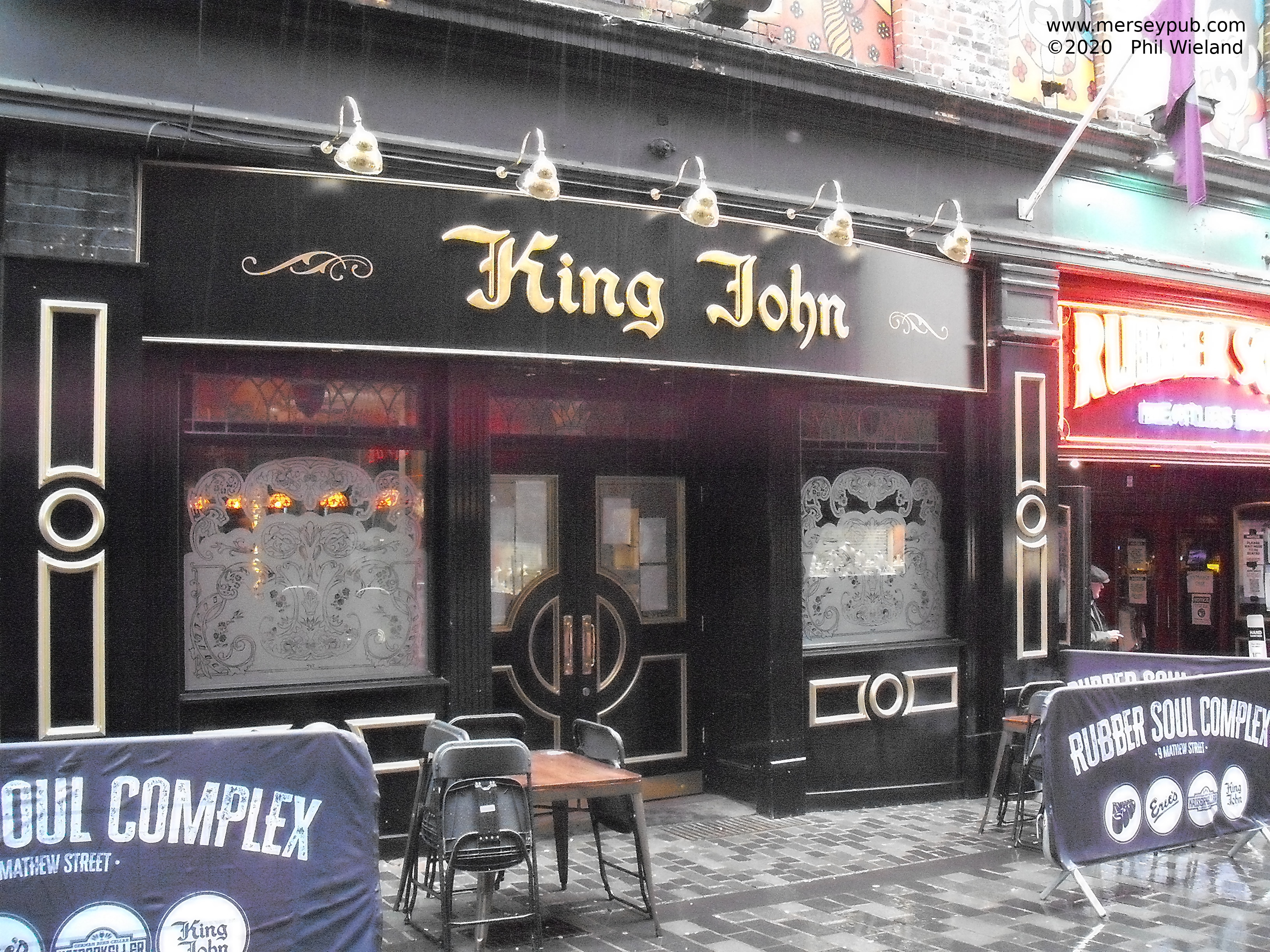 What a surprise!  A totally fake but rather well done "baronial" or maybe "cathedral" style room, with crossed swords, stained glass windows, suits of armour, a fantastic carved wood bar back and even a set of organ pipes, all combining to make a great fun interior.  I'm not sure the Tiffany lampshades really fit, but it really is a fine example of pub design.

Once again my temperature was checked before I sat down and ordered another Carling which was promptly brought to my table.  Three handpumps on the counter but all with the clips turned.  Only £2.30 for my pint, with a friendly warning that the price goes up when the match starts.

Only two other customers just half an hour after opening, hopefully they get more as the afternoon progresses.

The sound in here was football punditry on the multiple tellies, with chatter in the background.

My table was directly underneath a heater, so I had to shuffle along the bench seat a little to avoid the hot air.

Particularly impressive was the barman/waiter coming over to see if I wanted another pint before the price went up, that's proper service.

A few more customers came in just as Everton's match commenced.  I could see it was chucking it down at Goodison, so probably outside here as well.  After ten minutes of the match it was time to get wet and walk back to Lime Street for a train home.

I must say, all the places I visited today were coping well with the new rules and handling table service efficiently, unlike Wetherspoon's Blacklers where my friends and I waited a thirst inducing thirty-seven minutes for a round on Wednesday evening.

Today was my first survey carrying the NHS App.  It's good of them to provide me with a log of the day's ticks, in case I can't quite remember where I went! 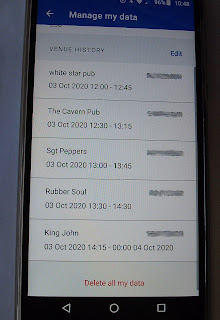