Judging by the news this could be my last survey for some time, in fact I did consider doing a crawl of my favourites rather than research today, but I resisted.

As last week, poor weather and doubts about opening scared me off the planned trip to Hillside, so once again I aimed for Mathew Street, but first there was a little call I'd been meaning to make for some time:  A couple of years ago when I visited Kensington I got a comment on the blog pointing out that I'd missed a pub.  I wasn't aware of the existence then of the Liver Vaults.  So, today I took a bus to Kensington and headed off down a side street with, to be honest, little expectation of success.  Sure enough, it was closed although I couldn't tell whether permanently or just because I was too early: 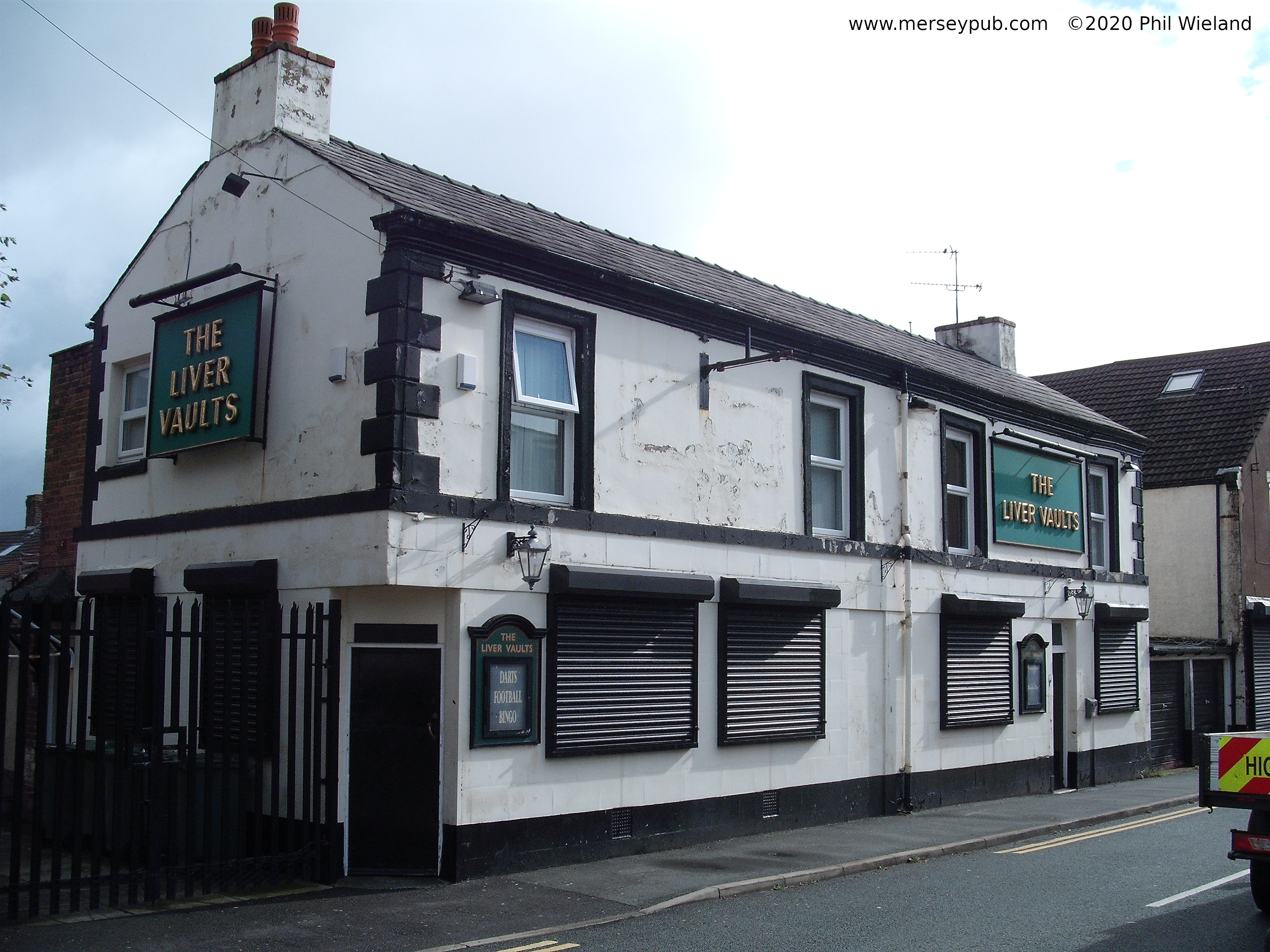 On to Mathew Street, and I started in Legends: 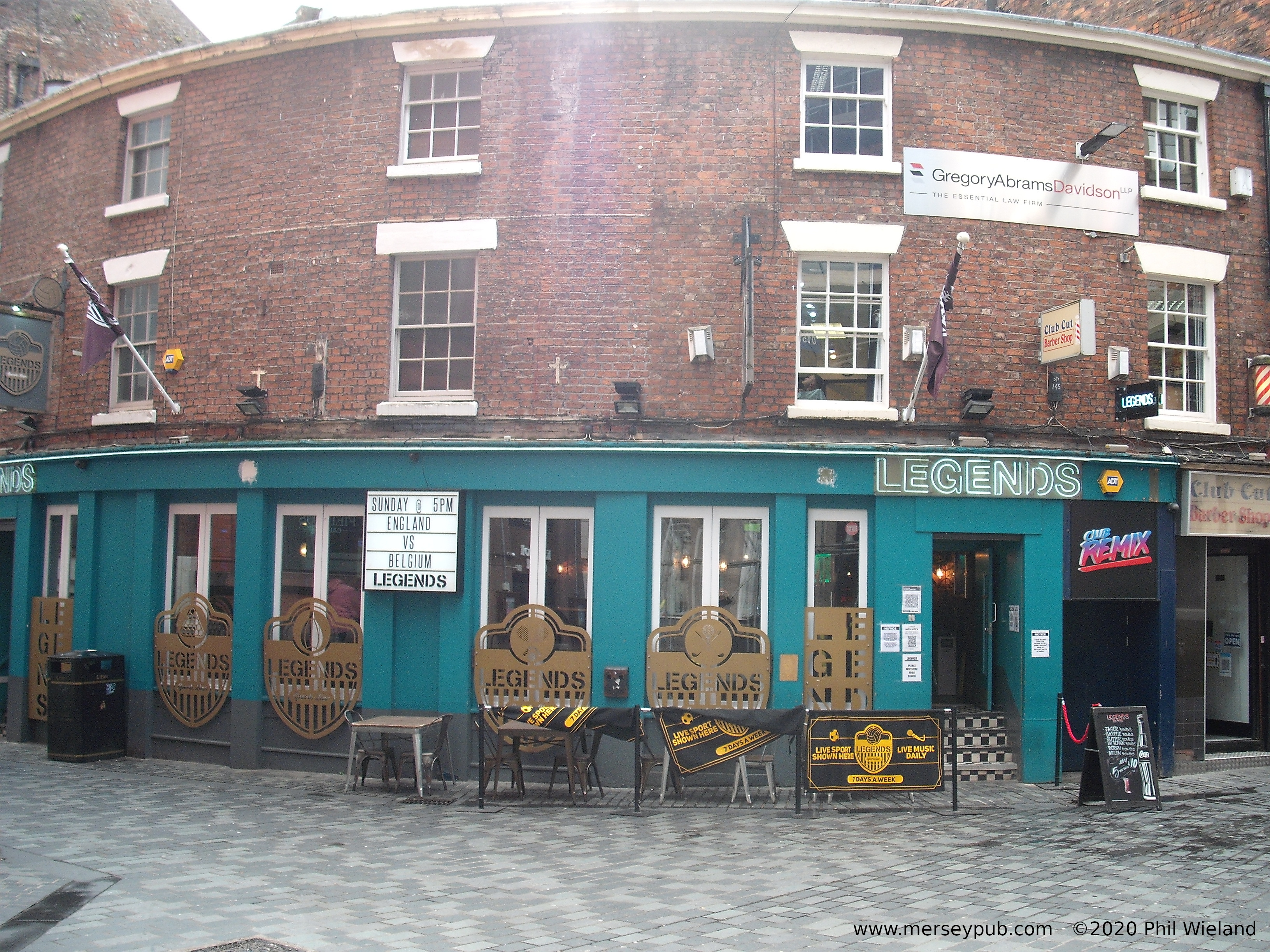 A rather well done sports-oriented place, this, with genuine looking bare brick walls covered in TVs and sports pictures.

Maybe a dozen customers in at one thirty and the barman quickly brought me a pint of Carling.

The tellies I could see were showing horses, but the one behind my head was on a different channel.  The other customers, mostly men of around my age, chatted and swigged their lagers.

Just across the road is a place, never ticked, that has had a number of names, the latest being Strawberry Fields: 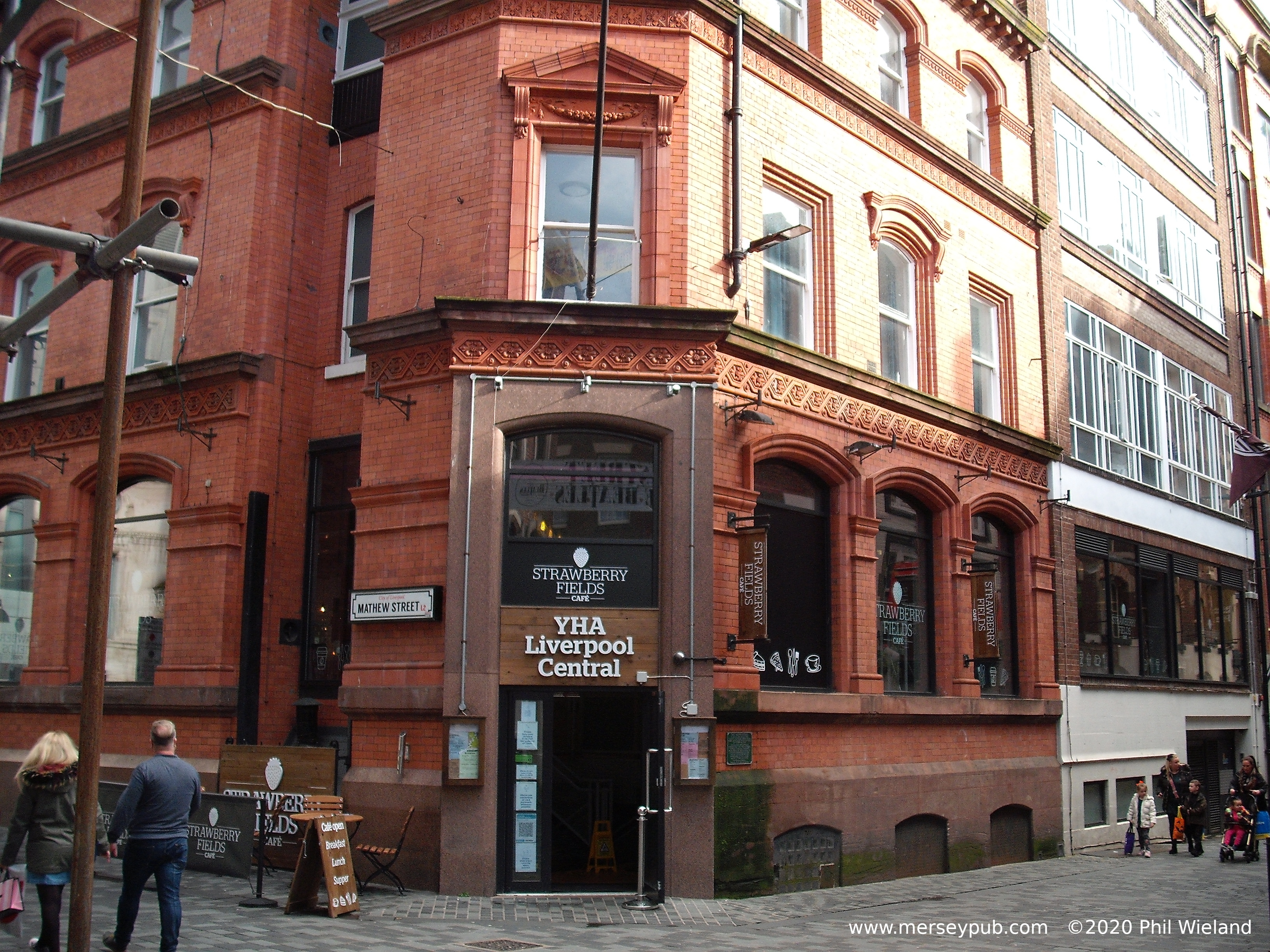 Not sure this is really a pub, it's more of a cafe, part of a Youth Hostel.  When was the last time I was in one of those, I wonder? Probably more than forty years ago.

Pleasantly decorated in modern "industrial" style with a fine quarry tiled floor, is it fake?

There's was a slight delay while the keg was changed but my tasty pint of Goose IPA was soon brought to my table by an efficient waitress.  And it was only £3.37.

I glanced at the TV which was showing Sky News.  Pubs in Liverpool to close from Wednesday, they predicted.  Disappointing but not surprising.

Gentle background music and two or three staff busy wiping surfaces and chatting were the sound in here.  The other two customers were dining, their burgers making me feel a pang of hunger.

I was rather amused by the menu on my table, apparently they do an "all day breakfast" from 8am to 11am.

That's almost it for Mathew Street so I headed to the other end and out onto North John Street, intending to visit the William Gladstone, but then I spotted Harrison's: 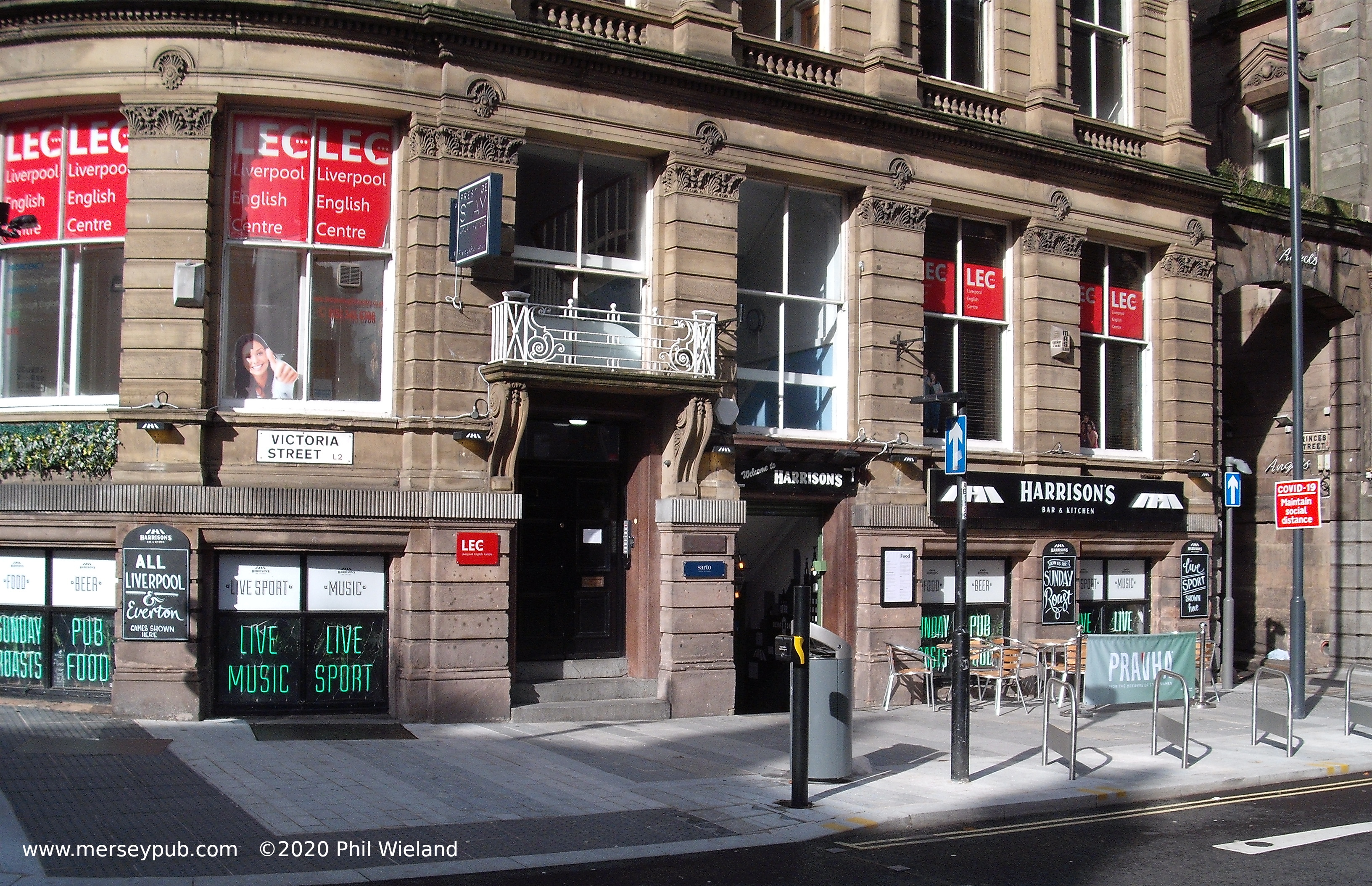 I had this recorded as closed, the former Beaconsfield, but it's back in action and very nicely refurbished inside, I must say.

Once again, prompt efficient service, and I was soon enjoying a pint of Blue Moon, which cost five quid.

The half basement is very well done out with some nice ceramics on the counter front and some rather good decoration including a great mural of the Beatles crossing a zebra crossing in the style of the famous Abbey Road album cover, but it is located on the street outside here and they're heading towards this bar.  Lots of TVs were showing footie.

The two staff were kept occupied with orders for cocktails, and once again they clearly demonstrated that table service can work well, unfamiliar though it is to British pub customers.   A friend of mine commented a couple of weeks ago, when our drinks were delivered to our table, "I could get used to this".  Perhaps table service in pubs will be, long term, a positive outcome of the current crisis.

I checked my previous notes for this place.  I think I saw live music here many years ago.  It hardly seems big enough.

Over the road is the entrance to a bar I've never visited (or even heard of), the Wall Of Fame: 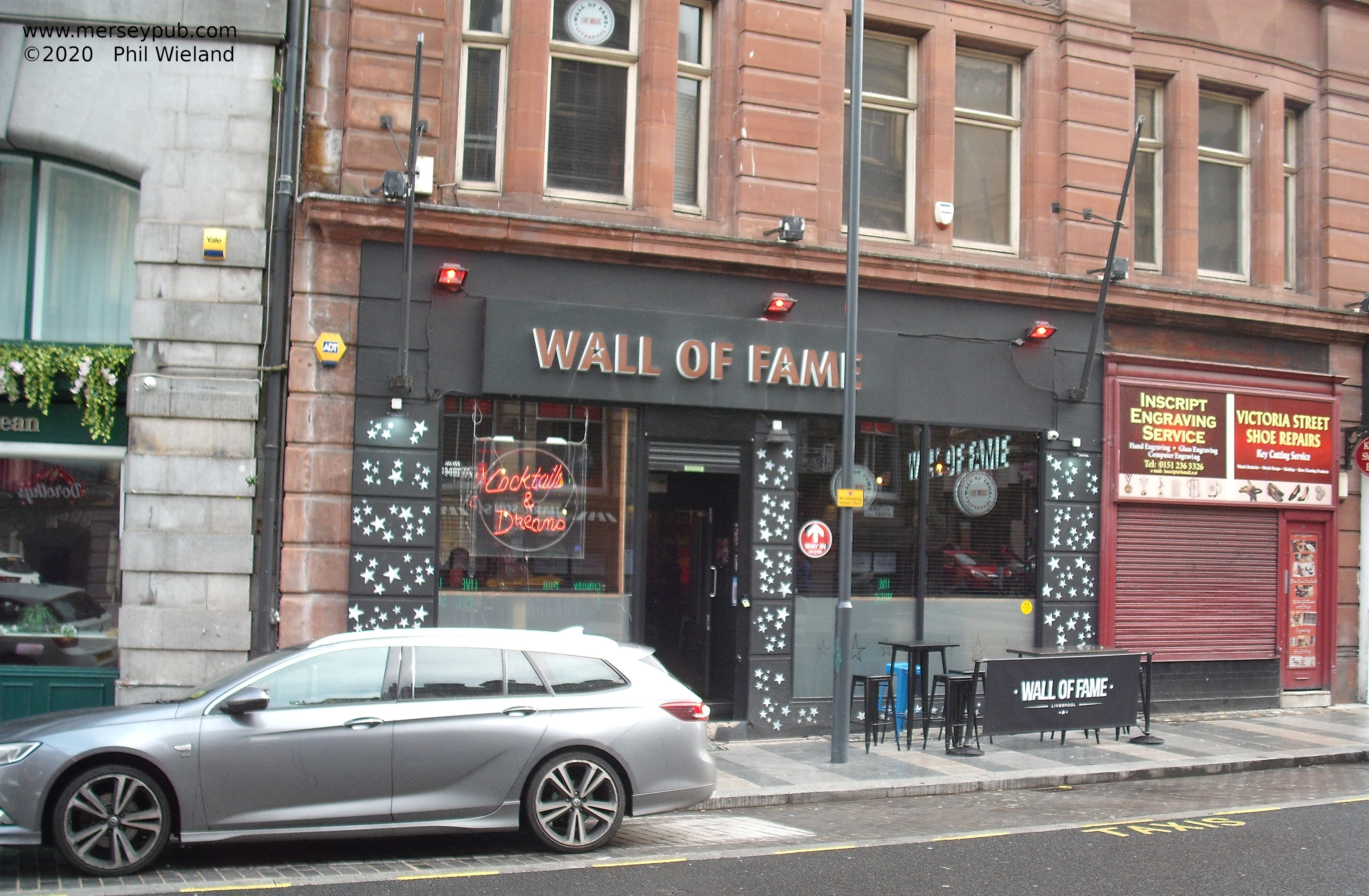 Annoyingly they didn't seem to display an NHS code so I had to use their own track and trace to sign in, no idea if it worked.

Noisy music and louder chatter filled this remarkably popular bar which has bare brickwork and coarse wood decor.  Very nicely done but I couldn't work out what the theme was.  I guess it's music.  The array of album covers, the motorbike covered in fairy lights, all made for a great appearance.  Physically it's located immediately above the Cavern Pub I was in last week and it runs through the building to a second entrance on Victoria Street.

They'd run out of Carling so I had something from Camden Town which tasted like it was the first one they'd poured for days.  And it cost £4.80.

Not my sort of place but being this busy at three on a wet Saturday afternoon they must be doing something right.  I say busy but there were plenty of empty tables so they could easily accommodate lots more people, but nonetheless the two bar staff were fully occupied serving drinks.

Is that rain I can see outside?  Perhaps that's why the scantily clad young ladies headed for the door and then returned to rejoin their friends.

I finished my pint and headed out by the other door, on Mathew Street: 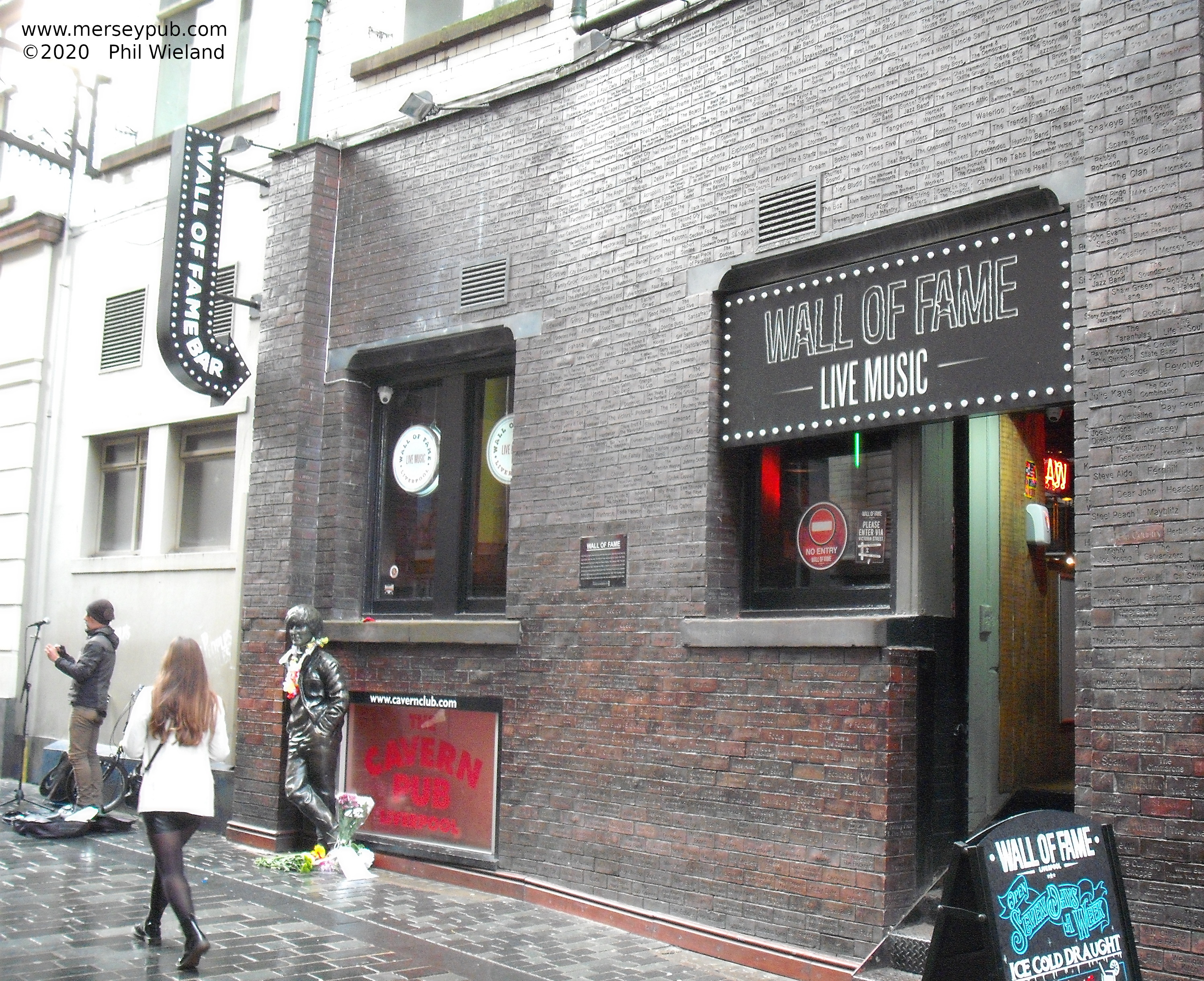 It occurred to me that this might be my last survey for some time so I skipped the target ticks such as the Gladstone and headed back towards Lime Street, and a final visit to the Crown, so at least I could finish with a decent pint.  Sorry, no picture, it's hard to get a good shot without risking getting run over, especially four pints into a survey!

It was quite busy, although I'm sure it would have been a lot busier on a Saturday afternoon pre-covid.  My Landlord was quickly delivered to my allocated table in the back room.

I await with some trepidation Monday's announcement

Pub of the day: The Crown
Miles walked: 1.7
Maybe coming soon: Who knows?
Posted by Phil Wieland at 23:06