I headed out on the long train ride to Ainsdale station, from where a short walk took me to the Spitfire.  Researches last week had suggested this would be closed so I only went to get a photograph, but I arrived to find it open: 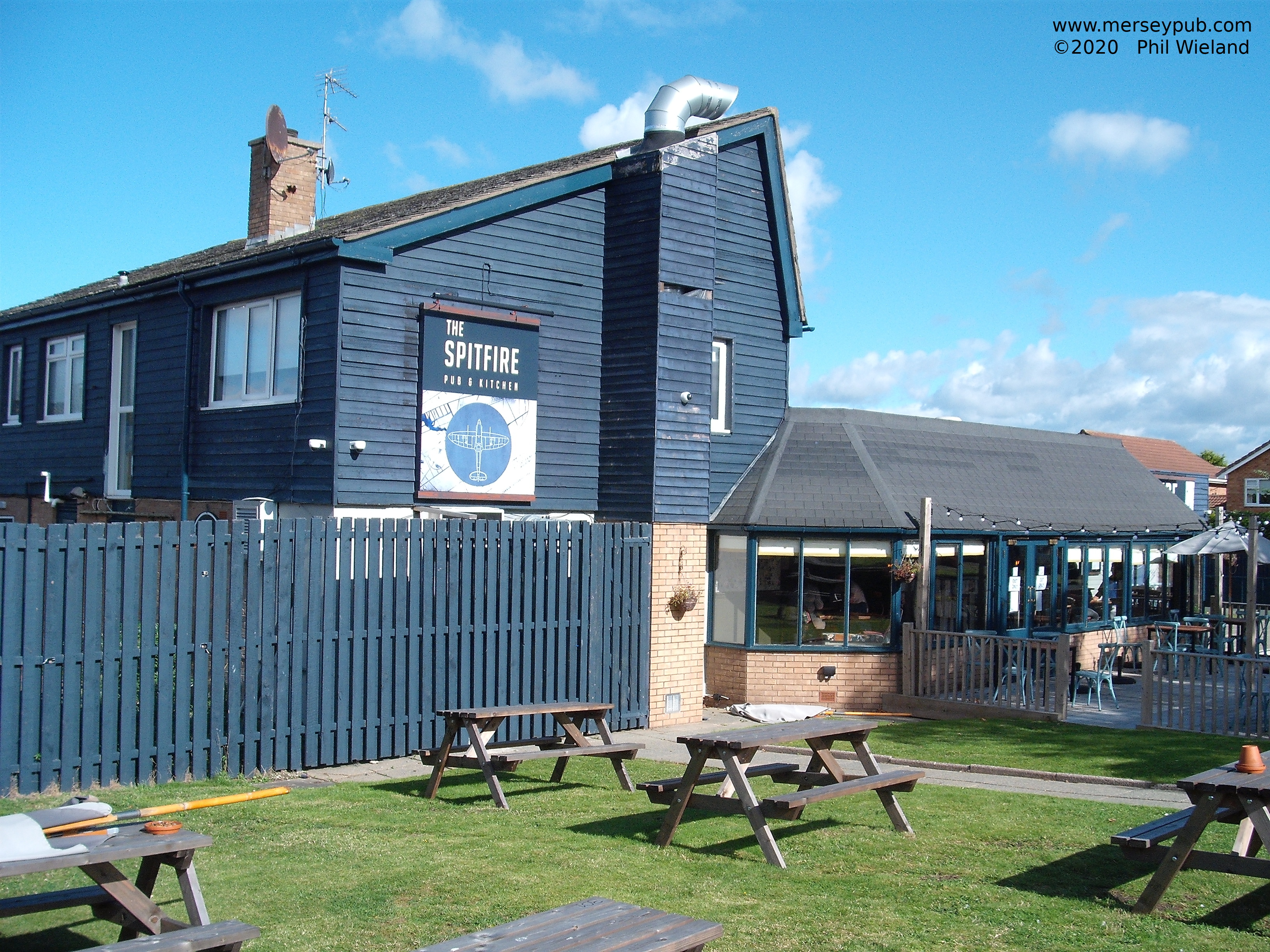 Inside this wonderful 1970s (?) building I found a very well done pub containing plenty of dining customers.  The waitress soon guided me to a table and fetched a fine pint of Landlord.

Back in 2010 when I ticked what was then called the Arion, I described it as plain, but the Spitfire is more up-market with contemporary restrained decor and, of course, quite a few pictures of the eponymous aircraft.

The audio was very quiet music mostly drowned out by cheerful chatter from multiple diners.

I didn't find the new mask rules unduly onerous, and I noticed the table service only rule was being bent slightly, with at least one customer going to the counter to order more drinks despite the "please do not approach the bar" signs.

Back to the middle of Ainsdale, and Tipple: 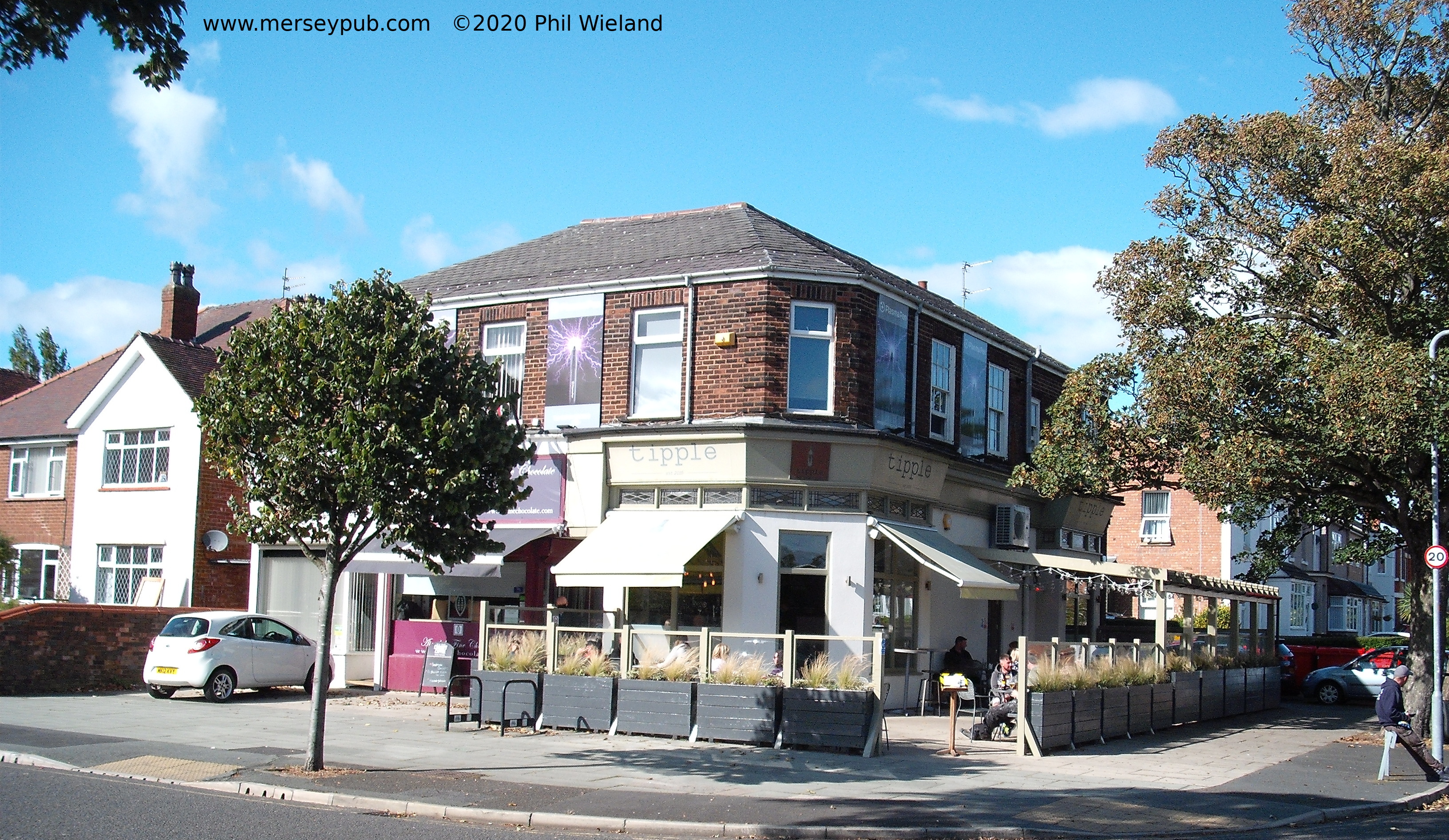 Never before visited, this one.  It's more of a cocktail bar and most of the customers were sitting outside in the chilly wind.

I hovered by the please wait to be seated sign for what seemed like an irritatingly long time but was probably less than 60 seconds before a waiter found me a table inside (That wind really is too cold!)  It was marked as reserved from 4.30 but I'll be long gone by then.

No handpumps so I went for Guinness.

This bar was doing really well, at least half the tables, inside and out, were occupied by cheerful drinkers and diners, and the waiting staff were kept quite busy.  Not so busy that they couldn't pull down their masks for an occasional gossip at the counter.

The decor, a little bit of bare brickwork, ivy above the counter and retro light bulbs everywhere, is straight out of the catalogue but pleasant nonetheless.

It's going to go wrong soon but not this time, I remembered to pay before I left.

Just a little way down the road is Champs: 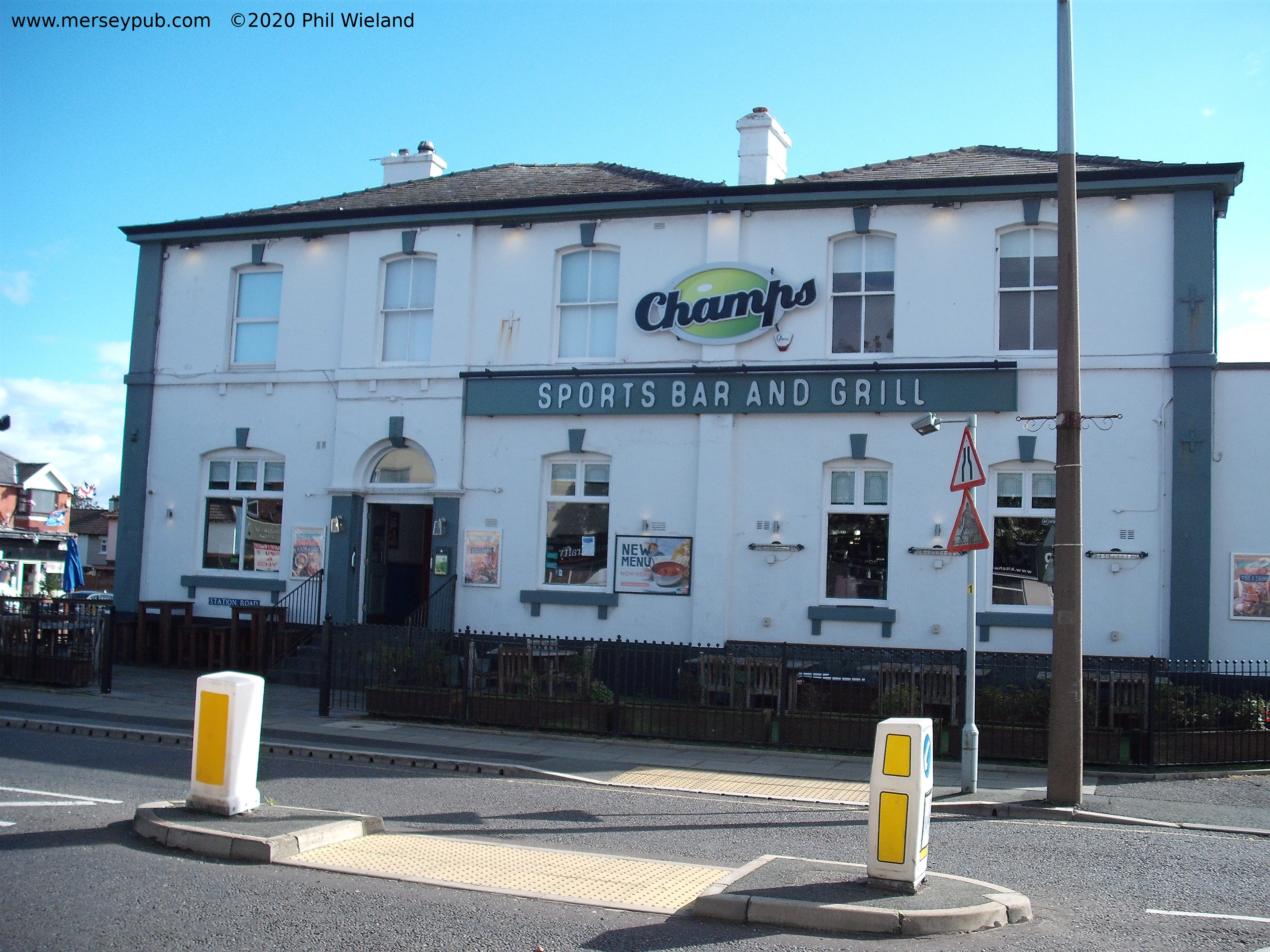 Another one last visited in 2010 when it was called the Railway, despite not being near any railway.  I noticed the Champs logo is the same as the one in Waterloo which has now reverted to its original name, the Marine.

A large pleasant boozer with TV screens everywhere and lots of sports-themed memorabilia ranging from signed photos up to a whole motorbike.

The efficient barmaid/landlady had me signed in and drinking Guinness almost instantly, all it takes is someone on the ball to make the new normal perfectly acceptable.  No risk of forgetting to pay here, as she brought the card machine over straight away.

I must say so far today the new rules have not spoiled my pub experience to any great extent, although I will have to learn to cope with a one minute delay before I can go in, and sometimes another minute or two before I actually get a drink.  Hardly serious problems!  By the way, I haven't noticed any signs for the new NHS app yet, is anyone using it?

I noticed all the TVs were showing MUTV, I suppose if they showed Liverpool or Everton half the customers would be annoyed, whereas everyone is agreed in their dislike of Man United!!  I also noticed that many of the TVs were different, one extra wide, one in a white case and so on.  Obviously someone with more sense than money (A rare reversal of my usual use of the phrase) had bought them on the cheap.  Very wise.

Almost next door is the never visited Morrells:

A modern styled large bar with big windows letting in lots of sunlight to the contemporary interior.  Once again the new rules were handled with aplomb and I was sitting down, signed in, paid, and drinking my Carling before I could catch my breath.

Only a handful of people were inside, plus one group out in the cold, at three on a Friday; I did wonder how busy a place like this would have been at this time last year.  Actually it would probably have been the same, it's a bit early for the Friday rush.

Further to my comments above, this place has got the giant QR code that I think marks the new NHS app, but my sign in was on a bit of paper.  I almost wanted to try scanning it to see what takes up all that data, but I couldn't be bothered.

Having commented about how cold it was outside in the wind, I must say it wasn't exactly warm in here.  Considering the impressive display of air conditioning ducts, one might think they could turn it on and warm the place up!

A couple came in and then, in negotiation with the waitresses, spent ages fiddling with mobile phones.  I've no idea what the problems was, I was just given paper for my sign in.

Next, a pub which ought to have been in my database for a long time.  I've ticked a number of Toby Carveries for my guide but for some reason this one one has been ignored.  But no longer, it's time to try the Toby Carvery Ainsdale.  Can I go in for just a pint under the current rules?  Let's see... 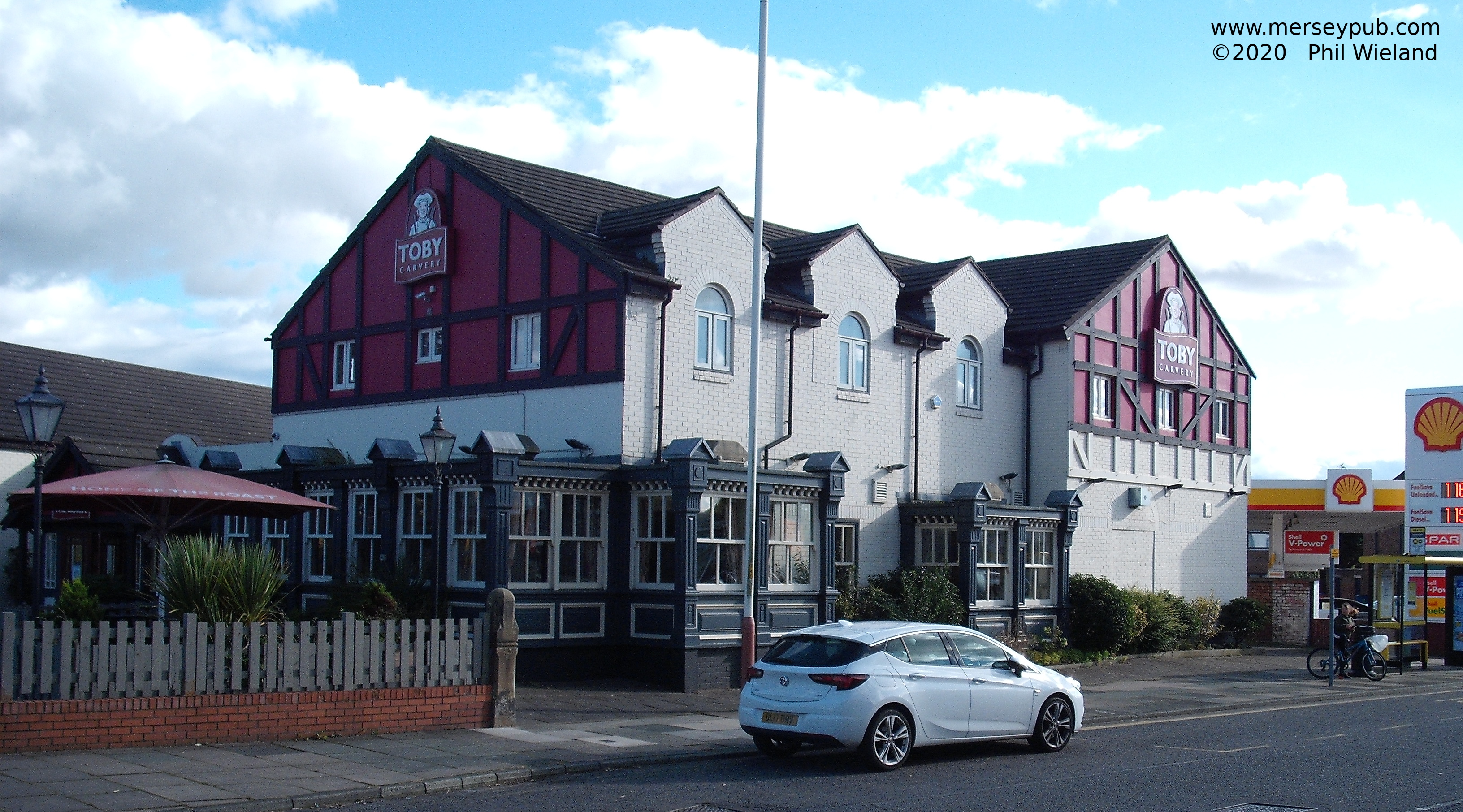 Oh dear, it's after four on a Friday and I'm almost the only customer in this enormous pub/restaurant.  The delicious wafting smell of roast suggested to me that there would be a lot of wasted meat at the end of the day.  The cynic in me thinks there might be some rather tough roasts served tomorrow.

The friendly helpful waitress soon recorded my details and quickly had me sitting and served with a pint of fizz, no real ale here.

Again, it was quite chilly, I kept my coat on.  I overheard a staff conversation saying they're going to turn on the heating tomorrow.  At home it has been on since yesterday.

Quiet muzac and nothing else was the soundtrack here, there weren't enough customers to make any chatter, in fact after a family left I think it was me and one other solo drinker.  Actually it's a big place, there might be a few other customers out of my sight round the corner.

I noticed the actual carvery was surrounded by barriers, perhaps it's not allowed under the current rules.  To be honest, I can't see the point of a "carvery" if you can't actually go up and get your choice of meats.  Perhaps the Tobys will be in trouble under the Covid rules.

I must say five ticks, three never before visited, is better than I expected under the current rules, a very successful survey and it's time to go home...

Well, I'd predicted it would happen but I hadn't thought it would be in the first week:  I donned my mask, returned my glass to the counter, visited the gents and then as I marched across the car park a waitress chased after me "Excuse me, you haven't paid!"  How embarrassing.  I returned apologetically and paid for my pint.  Judging by the attitude of the waitress I suspect I wasn't the first to forget, she didn't seem at all annoyed.  After over forty years of walking out of a pub when I've finished, I think it might be some time before I get the hang of paying on exit.

Irritatingly, the hold-up meant I missed the train by about thirty seconds, delaying my journey home by fifteen minutes.

Pub of the day: Spitfire, for a perfect pint of Landlord
Miles walked: 1.6
Maybe coming soon: Mathew Street
Posted by Phil Wieland at 23:30