Back In Time on Townsend Lane

I started this research trip at the Farmers Arms in Clubmoor: 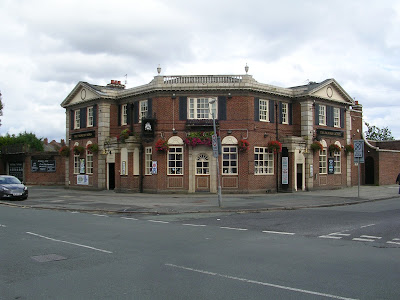 A bit of a gem, this one.  Built for Bent's Brewery in 1925 and extended and remodelled in 1930, the exterior is pretty much unchanged since then, and people more knowledgeable than I describe it as a striking Neo-Georgian design.

Inside many original features remain although the layout has been altered.  I especially like the archway linking two rooms on the lounge side which is typical of the work of the architects, Harold E Davies and Son, and similar ones were found the Gardeners' Arms in Broad Green by the same architects.

Back in the 21st century, the pub was ticking over nicely at 4pm on a Tuesday, with most of the customers known to the bar staff.  Umpteen televisions were showing two different racing channels and a music channel.  No real ale, so I had a pint of the black stuff.

Moving along Townsend Lane, the next pub is the Clubmoor: 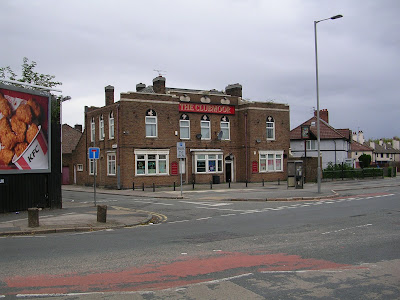 Another product of the same architects, built in about 1932, this one has a rather plainer exterior.  Inside on the lounge side I found a wood-panelled room with two further side rooms off it.  To my untrained eye much of the interior decor, wood panelling, decorative ceramic panels, fluted lampshades and ceiling plasterwork could be original.

Only myself and one other customer occupied the lounge, which had a distinctly un-cared for and tatty appearance, a new carpet and some re-upholstering of the seats is long overdue - Not to mention a few replacement lightbulbs.

Last time I was here, in 2002, I had a fine pint of Cains, but there's no real ale now so another pint of Guinness had to suffice while I enjoyed such classics as "Save Your Kisses For Me" on the speakers, just about managing to drown out the squawking baby in the other bar.

Just across the road, the Edinburgh Park Dockers Club, which was a classic working men's club with a small bar and a giant function room when I visited in 2002, stands derelict in a fenced off demolition site.

Next along the road is the Canon, a plain traditional corner house with two bars plus a back room.  The inside is well looked after and tidy, and all that's needed to take me back to my previous visit in 2002 (or probably to 1970!) would be the thick fug of cigarette smoke.  It would probably have been a lot busier back then, as well, but it was doing OK in 2017 with a hubbub of chit-chat all round the pub.

No real ale, of course, so the gorgeous and cheerful barmaid provided another Guinness.  One of the regulars, seeing me taking notes, commented "You're writing for England".  Goodness knows what he would have said if I'd been using my tablet to record my notes, as I sometimes do.  He went on to say that it was very quiet in here and twenty years ago they would have been three deep at the bar - Had he read my mind?

Final port of call, a little further along, was the Elm House: 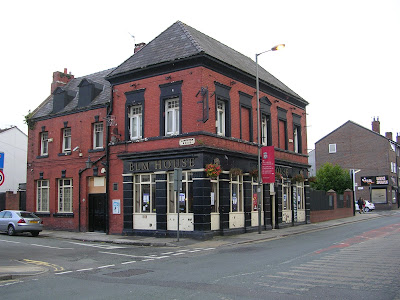 Only one half of this formerly two-sided pub was in operation, a few regulars and I spread out in the spotless front room.  Like the Canon, it was ticking over but would have been much busier and much smokier years ago.

Smooth Radio is not my idea of background music, the adverts, competitions and London travel news seem to take longer than the actual music.  After some difficulty with the remote control while trying to get racing on a different TV, we got Radio 1 instead.

My pal from the Canon came in and gave me a smile of recognition as I swigged a pint of Carling for a change.

So, four pubs ticked off, and it's pleasing to see traditional local boozers are still surviving.  In many areas this sort of pub has died out.  I'll have to head back here before too long, there's plenty more pubs to go at and I want to see if the splendid ballroom still survives at the Willow Bank.